The Anti-Corruption Commission (ACC) of Sierra Leone wishes to inform the general public, that it has on the 6th June, 2019, filed a ten (10) grounds Notice of Appeal in the Court of Appeals of Sierra Leone, against the judgment of the High Court of Sierra Leone in the matter of intituled The State Vs. Isha Johansen and Christopher Abdul Kamara.

The Appeal focuses purely on the interpretation of certain provisions of the Anti-Corruption Act, No. 12 of 2008 and related evidential issues. Having perused the judgment of the High Court delivered by His Lordship, Justice Reginald Fynn Jr., JA, the Anti-Corruption Commission has identified issues emanating therefrom that crucially require review by the Court of Appeals, particularly in relation to the ingredients of the offence of Misappropriation and the nature of evidence required to prove and establish it.

It must be noted that; while the Commission welcomes the finalization of the trial against Mrs. Isha Johansen and Mr. Christopher Abdul Kamara, and remains cognizant of the public interest for football to be played in the country; and while it confirms that having concluded trial it will not interfere with the continuance in office of the officials of the Sierra Leone Football Association pending the conclusion of the Appeal, the Commission in its mandate will protect the proper development of the jurisprudence relating to corruption offences and its effectiveness in the National Fight Against Corruption.

The Commission wishes to reassure the public of its commitment to controlling corruption at all times and appreciates their patience and support in carrying out its lawful mandate. 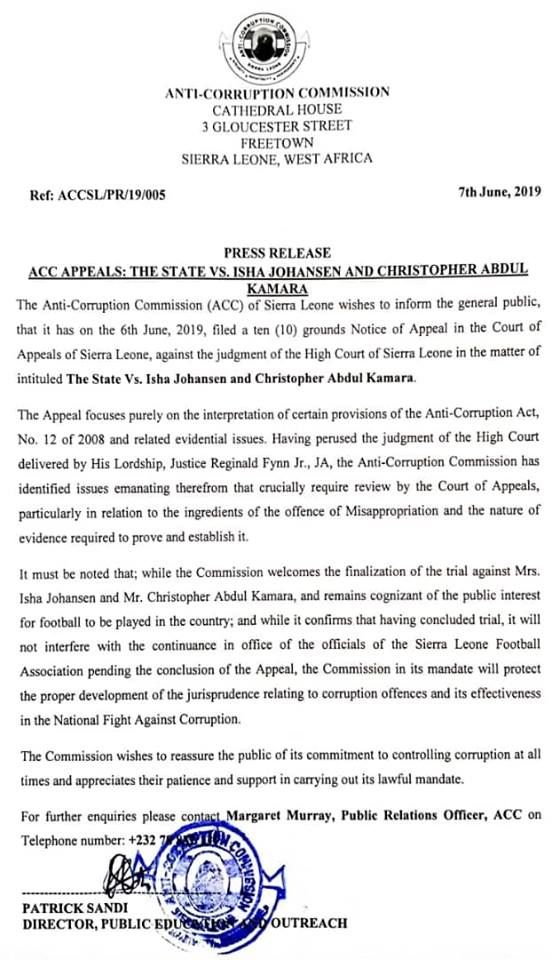