The Anti-Corruption Commission (ACC) wishes to inform the general public that its attention had been drawn to reports in the Auditor-General’s Report 2019 and various releases on traditional and social media on issues of budgetary allocations and expenditures of funds relating to the Office of the First Lady of Sierra Leone.

The Commission wishes it to be known that it had commenced full and comprehensive probe into the Office of the First Lady, past and present, dealing with matters of budgetary justifications for allocations and expenditures of State funds to that entity and the legal and regulatory framework, if any, for them. Preliminary findings show that the entity known as “Office of First Lady” had been receiving Billions of Leones of State funds yearly, spanning 14 years to date – and most of the payments were either directly made to the holders of that office or channeled, through the Presidency, as normal presidential official expenditure signed-off on by respective Secretaries to the President. We are similarly reviewing Section 39 of the Public Financial Management Act, 2016; which gives the State, authority to expend State funds to unallocated Head(s) of expenditure to a certain threshold, to “necessary” public cause(s), and whether such threshold was used and/or breached in making payments such as the ones under review, over the years.

We are therefore at the stage of collecting and analyzing records of accounts, official approval documents and any legal or regulatory framework around such payments; and the conclusions reached will assist in determining progress on the issue. We will also interview persons of interest in that regard, where necessary. We shall keep the public fully informed on our findings, conclusions and next steps.

The Commission wishes to reassure the public of its commitment to protecting public funds and to address all levels of corruption throughout Sierra Leone without fear or favor.

For further enquiries on this and other ACC matters, please contact MARGARET MURRAY, Public Relations Officer on +232-78-832131 or via email info@anticorruption.gov.sl. 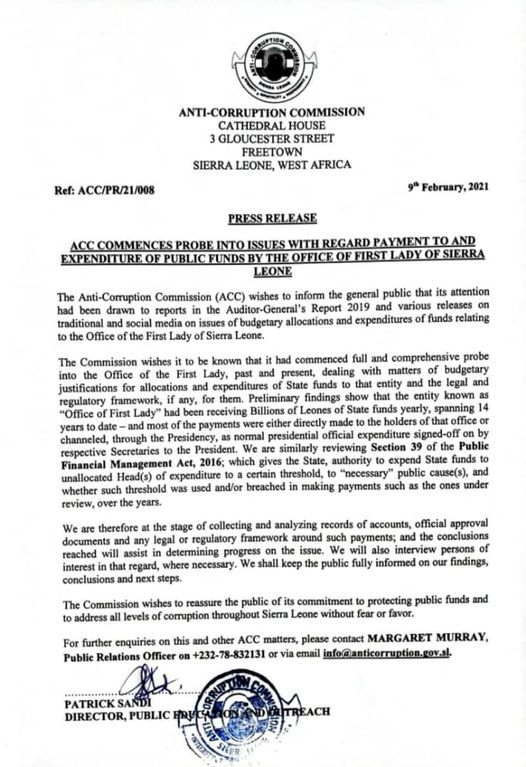