The Public may recall that on Thursday 21st and Friday 22nd November 2019, Honourable Ibrahim Tawa Conteh of Constituency 132, on the “Good Morning show” at Radio Democracy 98.1 made wide ranging corruption allegations against Mr. Umarr Paran Tarawallie, the Clerk of Parliament, and, in return, Mr. Umarr Paran Tarawallie, on the same program, made similar allegations against Hon. Ibrahim Tawa Conteh.

Further to this, the Anti-Corruption Commission (ACC) on Thursday 30th April 2020, commenced and expanded investigations into allegations of Misappropriation of Public Funds and other related accountability issues concerning Members of Parliament (MPs) and the Parliamentary leadership.

In order to ensure a fair and thorough investigation, statements were taken from the Speaker, the Parliamentary Leadership, several Members of Parliament, the Clerk of Parliament and Financial and Administrative staff of Parliament. A forensic examination of the budget and financial records of Parliament was undertaken. Also, key activities were probed, including: Constituency Development Fund (CDF), Leadership Imprest (LI), Office Imprest (OI), Donor Funds (DF), Sitting Fees for MPs (SFs), Procurement of Goods and Services (PG&S), Travel and Air tickets, Oversight Funds, etc. The issues were carefully, comprehensively and dispassionately investigated and our findings, conclusions and recommendations are as follows:

Constituency Development Fund of Sixty-Nine Million Leones (Le.69, 000,000.00) was given to each Member of Parliament (MP), for 2019. Considering the number and our limited resources, a random selection of well-balanced pool of Constituencies were sampled for investigation from across the country and Eighty-Four (84) constituencies out of One Hundred and Forty-Six (146) constituencies country-wide formed part of the investigation. That out of the Eighty-Four (84) Constituencies, a total of Seventeen (17) offices were rented or constructed by MPs, six (6) Constituency offices are still under construction and Sixty-One (61) Constituencies did not have an office space either rented or constructed. It was further revealed that majority of the MPs did not utilize the money for the purpose prescribed by the Speaker, i.e., to rent or build an office space; but rather, they claim to have used the money for other activities within their Constituencies as they deemed necessary. Many, including Hon. Ibrahim Tawa Conteh, had offices in their homes instead. There was, and remains, no established system in place to ensure specific use; and MPs could not agree on the strict understanding of the intended use.

In 2018 and 2019, the sum of Le23, 871,787,606.00 and Le27, 407,496,167.00 respectively was credited into Parliament’s imprest account at the Bank of Sierra Leone (BSL) by the Accountant-General’s Department (AGD). From the documents received by the Commission and analysed, it was clear that returns made by Parliament to the AGD after utilization of such funds showed that the monies were expended. This means imprest for both years were expended and appropriate returns were made for same.

With respect to the Leadership Imprest, our investigation revealed that Leadership imprest was not static as it varied from time to time and it is determined by the Parliamentary Service Commission (PSC). On a monthly basis, the Personal Assistants (PAs) of the various Leaders received Leadership imprest on behalf of their Leaders and signed on a Cash Transfer Form prepared by the Finance Department.

In 2019, Constituency Facilitation Fee (CFF) was credited on a quarterly basis into each MPs personal accounts as Constituency Facilitation Fee/Allowance, in order for MPs to meet assessed needs of their respective Constituencies. No supporting document was produced and submitted to the Commission on how the said money was expended by the respective MPs. Again, there is no system in place for retirement by MPs in this regard.

With respect to the procurement undertaken for the period 2018 and 2019, processes and procedures for the acquisition of goods and services were not fully followed. Most of the Procurements done did not go through the complete procurement cycle; (i.e.) Local Purchase Order (LPO) and Request for Quotation (RFQ) in some instances did not form part of some of the Procurement documents produced and submitted to the Commission by the Procurement Department. This signals a serious lack of proper procurement and accountability regime in the financing structures of Parliament; which need to be immediately and properly addressed.

In 2019, the Parliamentary Oversight Committee on Technical and Higher Education; and the Committee on Basic and Senior Secondary Education received the sum of Three Hundred and Five Million Leones (Le 305,000,000.00) from the United Nations Children’s Fund (UNICEF), for monitoring activities to be undertaken by the said Committees. The sum of, Two Hundred and Seventy-Five Million, Fifty Thousand Leones (Le275, 050,000.00) was expended for the two oversight activities, and the remaining amount of Twenty Nine Million, Nine Hundred and Fifty Thousand Leones (Le29,950,000.00) meant for post monitoring seminar, is yet to be expended. The said balance is in the imprest account of Parliament. This was confirmed by Abdul Rahman N’jai the Director of Finance. The draft reports on the above oversight activities have been developed, awaiting compilation for necessary presentation to the House of Parliament.

One key allegation n by Hon. Ibrahim Tawa Conteh was, the Ministry of Finance (MoF), as part of their budgetary allocation for 2018, allocated to Parliament, Two Hundred and Eighteen Million Leones (Le218, 000,000.00) for Oversight Activities (taking Parliament to the People). He furthered in his assertion that no Oversight activity was carried out for the period January to December 2018. According to him, since no oversight activity took place, the failure to return that money to MoF was misappropriation by the Clerk of Parliament.

We confirmed Hon. Ibrahim Tawa Conteh’s claim that, apart from the above-mentioned activities using the UNICEF Funds, no other oversight activity was carried out in 2018; as the Director of Finance said, it was not part of the activity plan of Parliament and that also, the Ministry of Finance did not approve any specific amount for oversight activity in 2018 (contrary to what was claimed by Honourable Tawa Conteh). The position of the Finance Department of Parliament and confirmed by the Budget Office of the Ministry of Finance, is that they receive bulk amounts and not specific activity-based amounts. However, they only released funds based on justified activities to be undertaken; and oversight was not part of them in 2018. All such funds were subject to retirement.

From the above explanation, which we confirmed with the Ministry of Finance’s Budget Office, there was no evidence to support allegation of Misappropriation of Public Funds meant for oversight against the Clerk of Parliament.

Our investigations further revealed that in 2018, Members of Parliament were entitled to Sitting Fees of Four Hundred Thousand Leones (Le 400,000.00) per month for MPs “sitting” in the Well of Parliament. Most of the MPs did not sign the payment vouchers after they would have received their monthly Sitting Fees. Some MPs did sign and others asked a third party to sign and receive theirs on their behalf without any formal form of authorization.

This again, signals a weak accountability regime within the public finance utilization structures of Parliament and needs to be rectified.

In the course of our investigations, we realized that the issue of the payment of Air tickets totalling Two Hundred and Thirty-Two Million, Five Hundred and Eighty-Three Thousand, Twenty-Two Leones, Fifty Cents (Le232, 583,022.50) in 2018 for Members of Parliament, was raised in the 2019 Audit Report. According to the Auditor General’s Report, supporting documents were not attached to the payment vouchers presented for audit inspection.

However, during our investigation, KARL Travel Agency produced and tendered to the Commission supporting documents such as (invoices, receipts, Parliament, Bank of Sierra Leone Advice etc.) for the above-mentioned amount for Air tickets after the deduction of the 5.5% Withholding Tax.

After due consideration of the statements recorded in the matter and documents obtained from the Finance Department of Parliament and the Accountant General’s Department, after reviewing all factors relevant to the investigation, the Commission has concluded that though the actions of some MPs and members of the Finance Department are not in accordance with prudent financial management systems, the necessary evidential threshold required to proceed with criminal prosecution under the Anti-Corruption Act (ACA) 2008 (as amended in 2019), has not been attained. The issue therefore will be dealt with using the prevention approach within our mandate.

With that said, however, what emerges from perusal of the statements and documents is the absence or serious lack of systemic and appropriate monitoring and accountability regimes; thereby encouraging risky practices in the management of public funds by the administrative architecture of Parliament, the Members of Parliament, and in some instances, its leadership.

The Commission will therefore work with Parliament for a policy review to give clear guidelines and directives in that regard, and ensure prudent financial policies that could prevent the re-occurrence of the lapses outlined above, in subsequent financial years.

To this end, and in accordance with our mandate as stipulated in Section 7 paragraphs (f), (g) and (h) and in Section 8 of the Anti-Corruption Act, No 12 of 2008 (as amended in 2019), the Commission will refer this matter to the Prevention Department of ACC to work with the Management of Parliament, the Members, and the Leadership of Parliament, and the Ministry of Finance to initiate systems and processes review, so as to make appropriate recommendations and administrative adjustments that will enhance sound and prudential financial and administrative architecture.

The Commission is grateful for the cooperation of the Whistle-blowers – Hon. Ibrahim Tawa Conteh and Hon. Umarr Paran Tarawallie, the Members of Parliament, the Speaker and his Deputy, and the Ministry of Finance during our investigations. We also appreciate the patience of the Public during these very complex forensic financial investigations.

Meanwhile, the ACC wishes to reassure the general public of its resolve and commitment to protecting public funds and revenue across the country at all times and at all levels of government. For further enquiries on this and any other ACC matter, please contact Margaret Murray,  Public Relations Officer, on +232-78-832131 or via email info@anticorruption.gov.sl. 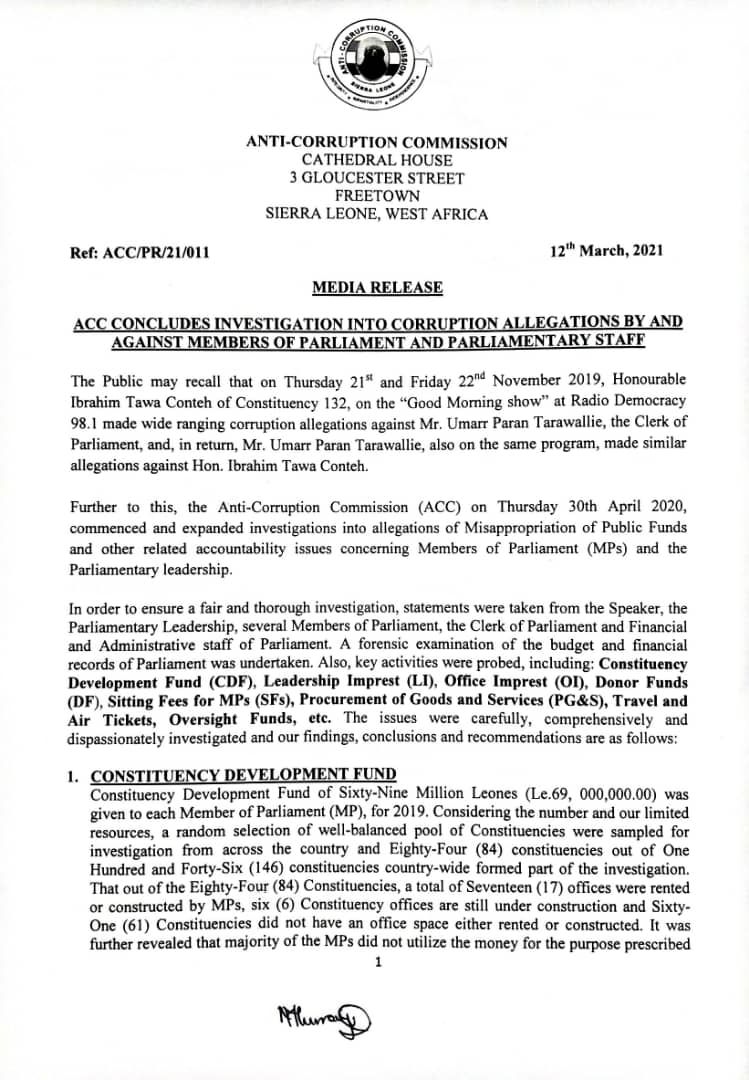 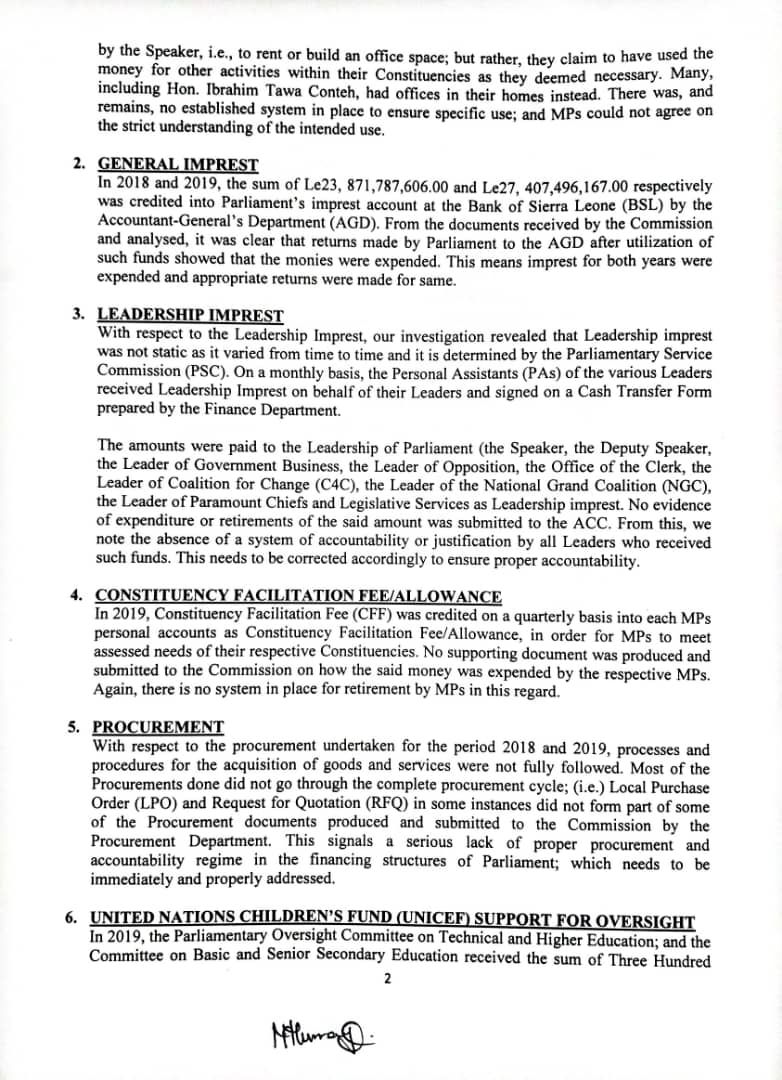 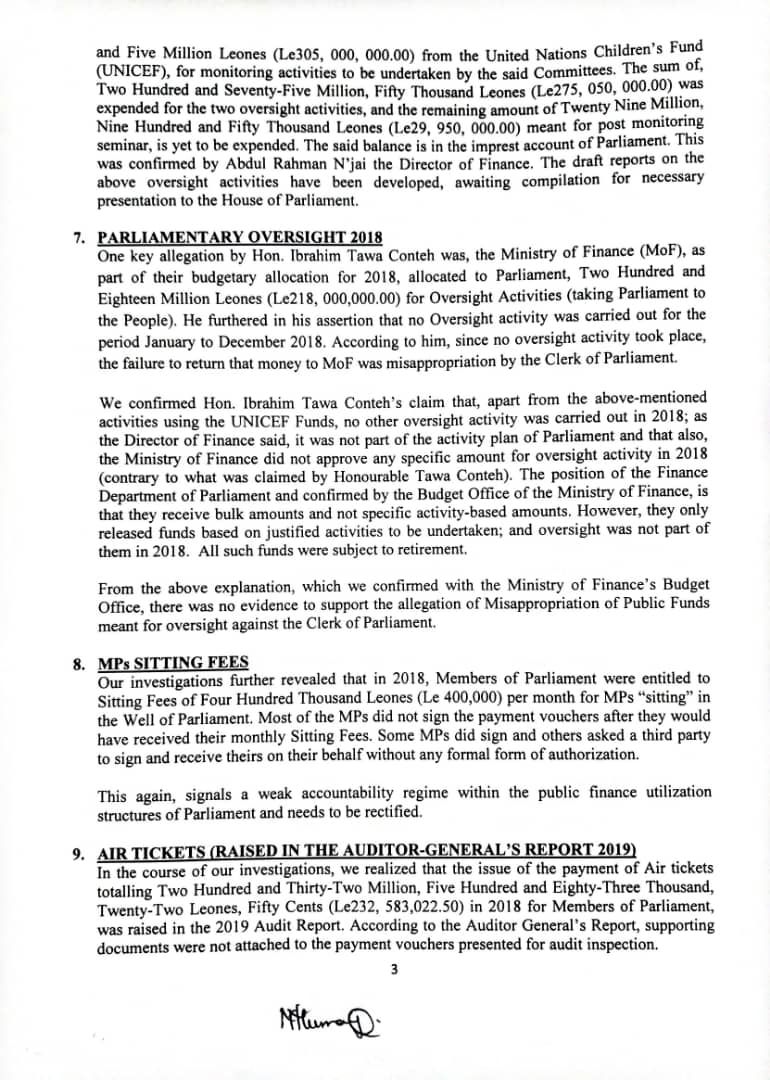 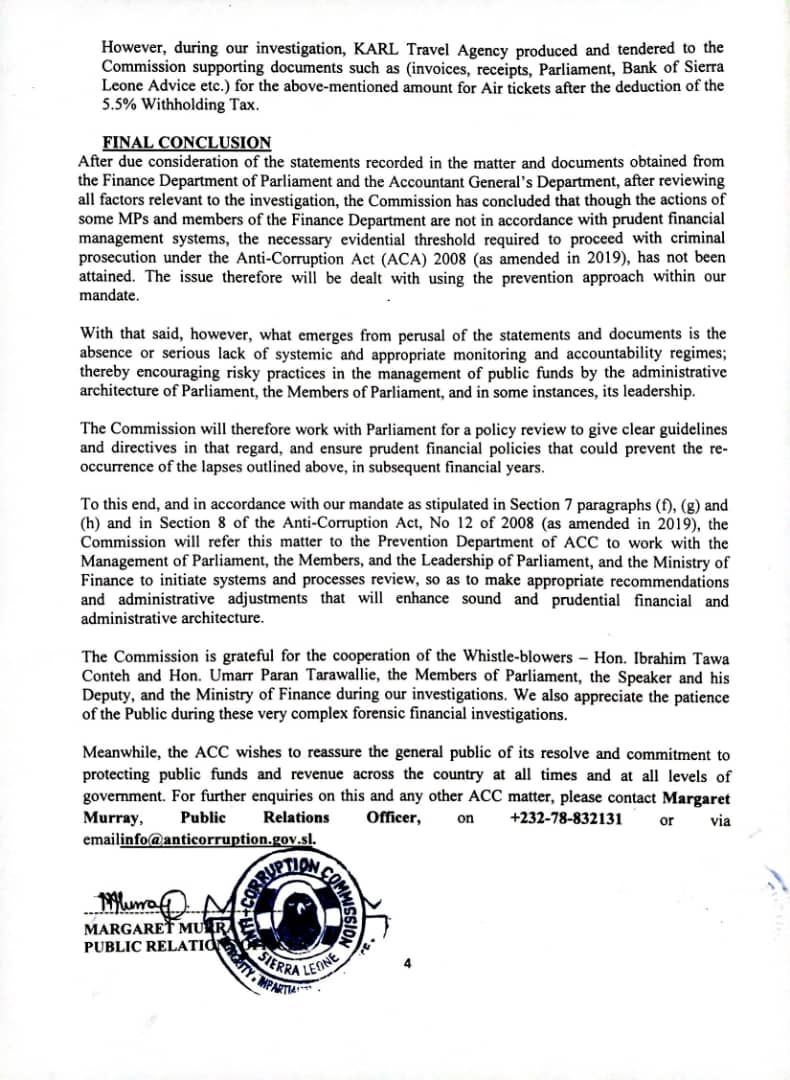 “HOW CORRUPTION UNDERMINES THE DEVELOPMENT OF A NATION"