ACC CONCLUDES INVESTIGATION INTO THE ACADEMIC CREDENTIALS OF THE DIRECTOR OF ADMINISTRATION AND HUMAN RESOURCES AND OTHER STAFF OF THE NATIONAL TELECOMMUNICATION COMMISSION (NaTCom).

In furtherance to its support to the Tertiary Education Commission (TEC), the Ministry of Technical and Higher Education (MTHE), and other partner stakeholders in the verification of the credentials of public officers in Sierra Leone, the Anti-Corruption Commission (ACC) wishes to inform the general public that it has concluded investigations on the degrees, certificates and other academic credentials of Braima Ronnie Kargbo, the Director of Administration and Human Resources of National Telecommunication Commission (NaTCom) and other staff, following allegations that they submitted to NaTCom fake academic credentials to attain their respective positions.

Firstly, with regards to Braima Ronnie Kargbo, the ACC focused on Njala University College, as it was called then, where the said staff is said to have attained the minimum qualification for his role while verification continues on other credentials attained overseas. The investigators interviewed the Registrar of both the University of Sierra Leone and the Registrar of Njala University and many other interested persons – including the retired Professor who supervised his Dissertation, his former classmates, etc.. The investigation confirms the following:

i.          That there are progressive grades record from first year (1992) to final Year (1999) which contained grades for a student named ‘Braima Kargbo’ for the Degree of Bachelor of Science in Agriculture General in the Second Division, with Distinction in Project and was awarded in 1999; and that the degree submitted by “Braima Ronnie Kargbo” bears the name ‘Braima Kargbo’ (Note the Name differentials).

v.         Despite questions surrounding the name, which we have thoroughly investigated, and neither the Njala University nor the Braima Ronnie Kargbo could adequately clarify, there is evidence to show that a Braima Kargbo attended and/or completed his studies for a BSc Degree in Agriculture General, at Njala University College (though there was eventually a clear spelling error on the certificate and the same has not been corrected to date).

vi.        There has also been several records and evidence, as listed below, which support the claim that Braima Ronnie Kargbo did attend Njala University College as follows:

a.         Confirmation of his Degree Certificate (though with anomalies on the spelling of his name) which he and the university have failed to explain stating that they lost their records due to displacement of the University during the war.

b.         His (Braima Ronnie Kargbo) graduation photographs as evidence of graduation from Njala University College which clearly show him shaking hands with President Kabba at the Fourah Bay College together with other students.

c.         Interviews with other classmates who positively confirmed his attendance with them.

d.         A copy of his Dissertation obtained from him and the University.

e.         His supervisor, Professor Abdulai Jalloh, a former Lecturer at Njala University College, confirmed the supervision and conclusion of his Degree.

vii.       That, there is evidence that the name ‘Braima Kargbo’ did attend Njala University College from 1992 and graduated in 1999 but the investigation could not disprove that the Braima Kargbo that attended Njala University College was not Braima Ronnie Kargbo, the Director of Administration of NaTCom as, despite all efforts and attempts, the University cannot trace and provide the Matriculation Booklet/Register of 1992 signed by students upon their enrollment into the college because of their displacement and return due to war and they lost many records in the process. The availability of such foundational record could have helped to establish whether a different ‘Braima Ronnie Kargbo’ was admitted into Njala University College that year and signed the College Register. Without any evidence to the contrary, Braima Ronnie Kargbo would have to benefit from the doubts raised.

viii.      That the above findings and limitations have blurred the clarity of the evidence trail to such an extent that it is difficult to conclude that the Braima Kargbo that was awarded the BSc Degree in Agriculture General with Distinction in project at Njala University in 1999 is not the same Braima Ronnie Kargbo at NatCom. The ACC has therefore communicated this conclusion to the Management of NatCom.

ix.        With regard Adeyemi Leroy Coker, the ACC accepts the recommendation of the Tertiary Education Commission (TEC) on the status of Degrees conferred by the African Graduate University (AGU) and directs that NaTCom should administratively do the needful if he was employed or promoted on the presentation of the AGU Degree and/or Certificate as those have been said to be null and void by the TEC.

x.         In respect of Mr. Robert Kondema Kargbo’s appointment, there were no set academic qualifications for his position as Commissioner of NaTCom (Representing Civil Society) apart from it being by Presidential appointment and subject to Presidential Prerogative. He however possesses a Diploma in Peace and Conflict Studies from Milton Margai College of Education. He denies presenting African Graduate University documents for Parliamentary vetting and Parliament did not provide to us evidence to dispute this claim.

The ACC wishes to further inform the public that it will continue to update the public on investigations concluded, into individuals and institutions alleged to have ‘fake degrees/certificates’ and have been conferred an advantage within the meaning of the ACC Act. For further enquiries on this and other ACC matters, please contact Sylvanus Blake, Assistant Public Relations Officer on +232-78-832131 or via email info@anticorruption.gov.sl. 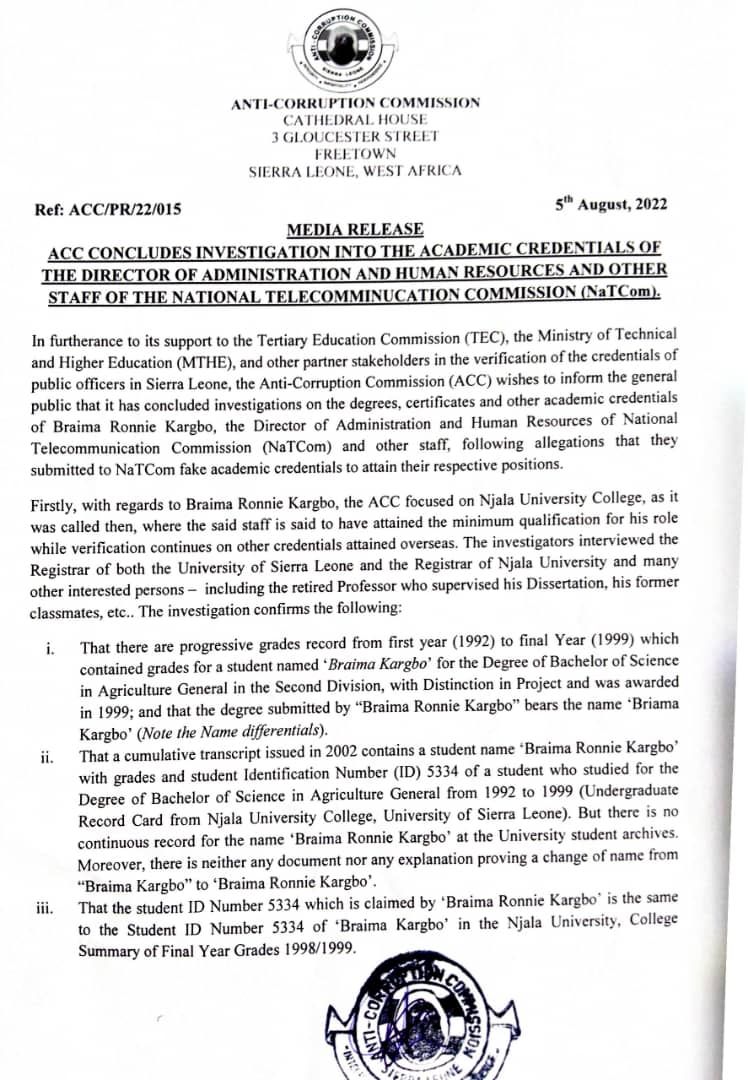 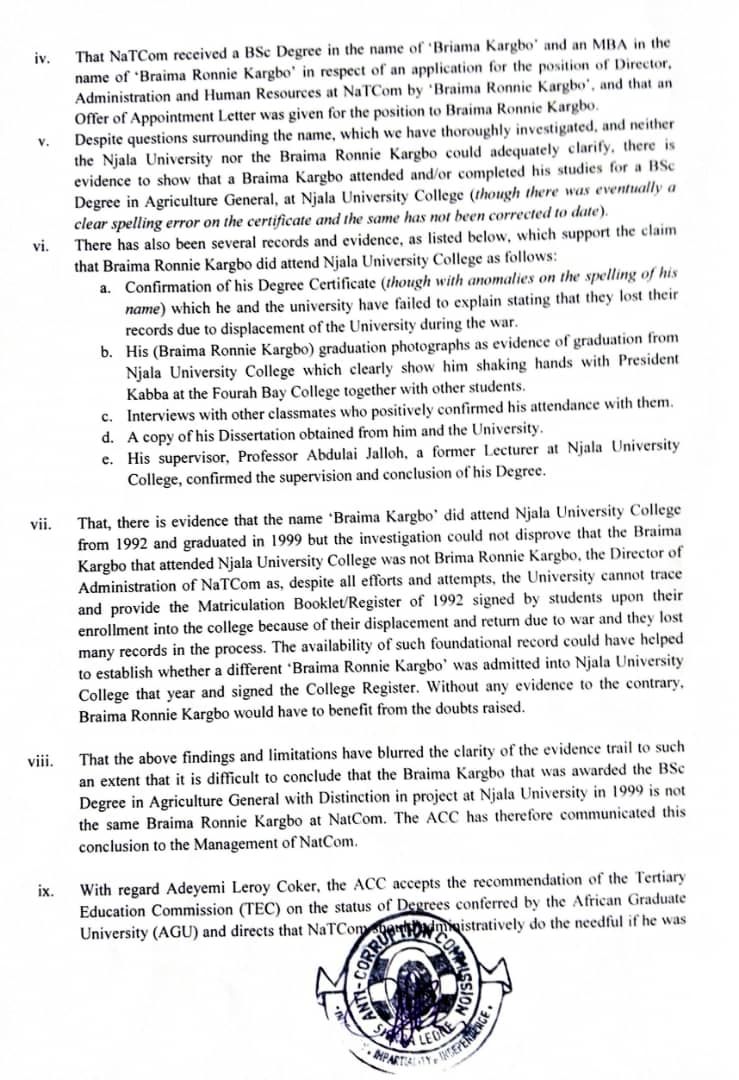 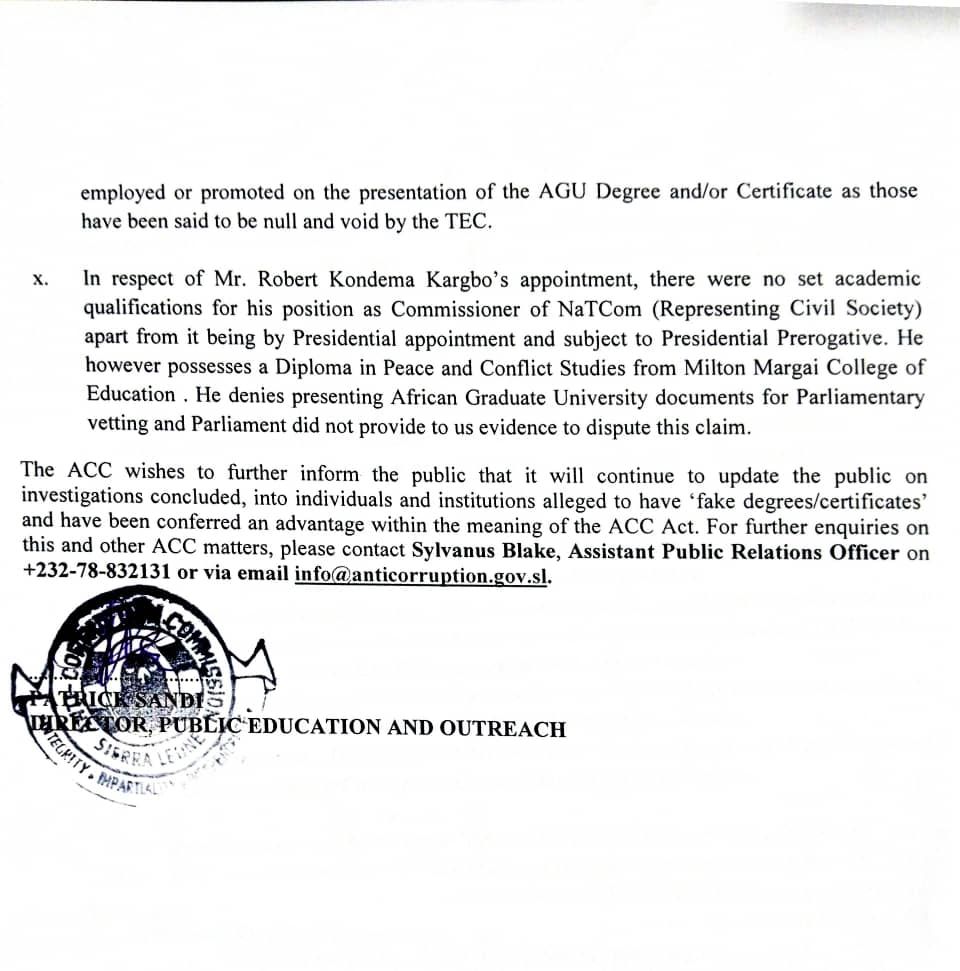