The Anti-Corruption Commission, on 23rd September 2019, filed an indictment against STEPHEN YAYAH MANSARAY, former Master and Registrar of the High Court of Sierra Leone; RICHIE EDWIN ASGIL, former Principal Accountant in the Judiciary; ADELE FAYA, former Account Clerk of the Judiciary; and CLARENCE SOLOMON WILL, a Legal Assistant at a Law Firm in Freetown; on various counts of Misappropriation of Public Funds, contrary to Section 36(1); and Conspiracy to Commit a Corruption Offence, contrary to Section 128(1) of the Anti-Corruption Act 2008, respectively.

STEPHEN YAYAH MANSARAY and RICHIE EDWIN ASGIL were the signatories to the Judiciary’s Master and Registrar’s account domiciled at the Bank of Sierra Leone. On diverse dates, between June 2014 and May 2018, both accused men, conspired with others to sign a number of cheques through which they authorized the withdrawal of funds from the aforementioned account for their personal benefit or for other unjustified purposes.

Similarly, ADELE FAYA, former Account Clerk of the Judiciary, also instructed the encashment of various cheques from the same account, and misappropriated these monies.

CLARENCE SOLOMON WILL, a Legal Assistant at Bah & Co., a law firm in Freetown, on diverse dates between 25th April, 2018, and 14th March, 2019, conspired with unknown persons, to misappropriate public funds by illegally facilitating the encashment of cheques from the Judiciary’s account.

All accused persons are expected to appear in the High Court holden at Freetown on Monday 30th September, 2019.

The Commission wishes to reassure the general public of its continued resolve to fight acts of corruption at all levels and at all times in Sierra Leone.

For further enquiries on this and other ACC matters, please contact the Public Relations Office on:+232-78-832131. 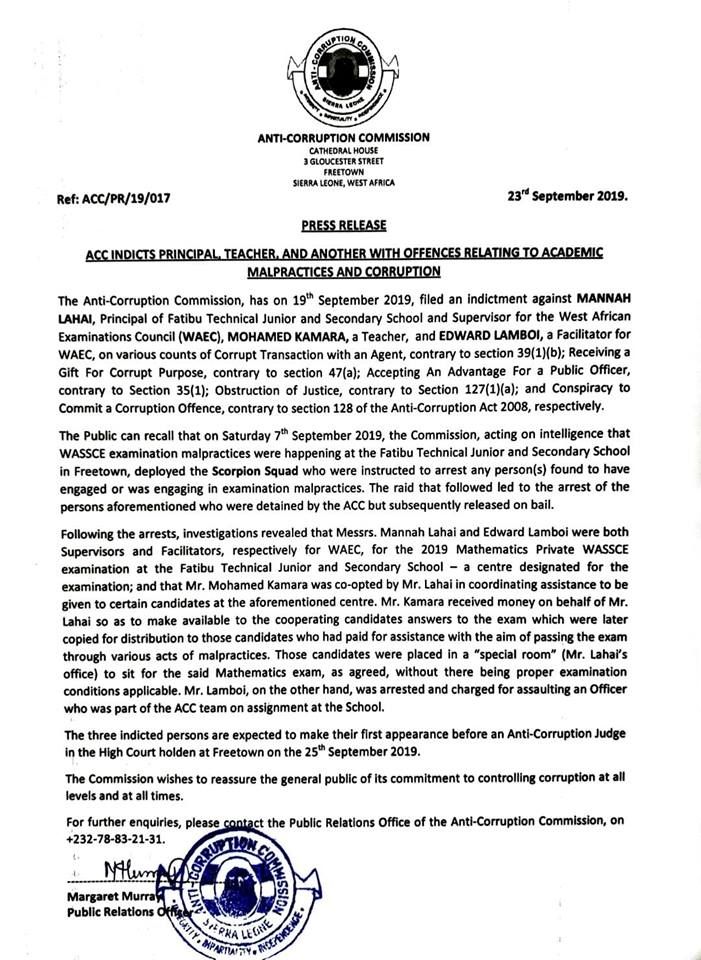