ACC HANDS OVER 8 BILLION LEONES CHEQUE TO PRESIDENT JULIUS MAADA BIO AS PART OF 26.8 BILLION LEONES RECOVERED IN THE PAST TWO AND HALF YEARS AS NON-CONVICTION BASED ASSET RECOVERY

The Anti-Corruption Commission (ACC) wishes to inform the general public that it has presented to His Excellency, President Brig. (Rtd.) Dr. Julius Maada Bio, a cheque of EIGHT BILLION LEONES (Le 8BN) as part of a total of TWENTY-SIX BILLION EIGHT HUNDRED MILLION LEONES (Le 26.8 BN) recovered since July 2018 from the corrupt as part of its non-conviction based asset recovery. This amount in the cheque represents the total recovery in cash from the corrupt for the year ending December, 2020. The presentation ceremony took place on Wednesday 30th December, 2020, at State House in Freetown.

Presenting the cheque in the afore-stated amount to President Bio, the ACC Commissioner, Francis Ben Kaifala Esq., said a strong anti-corruption effort goes after “the assets” in addition to strategies like prosecution, prevention and public education and not just “the person”. He stated, “In Africa, we have been a leading example in the way to fight corruption and I am proud to say many other countries are following and learning from us”. He went further to note that, the cheque being presented by the ACC is part of undiluted non-conviction-based asset recovery effort only; and does not include monies recovered on behalf of Government agencies, fines imposed by the Courts, and other assets recovered like houses and vehicles.

Receiving the cheque, the President thanked the ACC Commissioner and his Team for “the way they have spearheaded one of the most difficult fights admirably”. He said most of the problems the country faces today were as a result of acts of corruption and the fact that little or nothing was being done to combat them over the years preceding his tenure. “We know corruption always fights back, but we should never relent because this is a fight for the poorest of the poor,” the President said. He said he was happy that the anti-corruption campaign is producing results that have made him proud because of the way other nations make reference to Sierra Leone’s anti-corruption efforts in his presence at high level meetings and in conversations among his peers. The President reiterated his commitment to building a modern medical diagnostic centre in Sierra Leone from the stolen funds recovered by the ACC, which he said are part of his Human Capital Development agenda.

For further enquiries on this and other ACC matters, please contact MORIS IBRAHIM KANTEH, AssistantPublic Relations Officeron +232-78-832131 or via emailinfo@anticorruption.gov.sl. 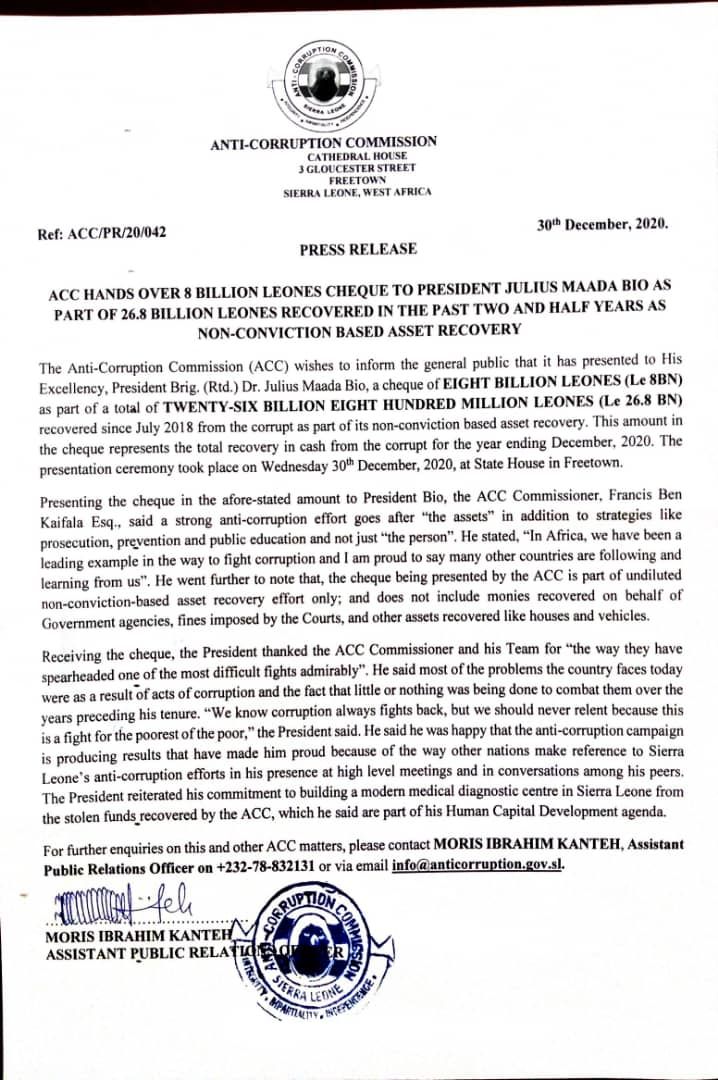