According to the particulars of offence, Dr. Samai, being a Medical Doctor at the Government Hospital, Bo, between the 23rd February 2017 and 31st August 2019 conferred an advantage on himself by the unlawful disposal of one 25ES 20 KVA generator from the Bo Government hospital for use in his private premises while the hospital continued to experience challenges with electricity supply.

Our investigations confirmed that as medical doctor, he instructed the removal and transfer of the generator from one of the wards and the generator was never returned. The Commission later found a generator of the similar description in his home albeit newly sprayed from green to Yellow. He instructed one Muctaru Monrovia, an electrician at the said Hospital, to disconnect the aforementioned generator and remove it from the said premise. When search was carried out at the residence of Dr. Samai, two generators were found for which he failed to produce receipts. A prior search was conducted by the Sierra Leone Police based on intel given by a journalist, who found what is believed to be the aforesaid generator in the premises of Dr. Samai.

It has also been discovered that Dr. Samai, being a Public Officer, failed to declare his assets and liabilities for the period 2018 and 2019, as is provided for in section 119 of the Anti-Corruption Act 2008.
Dr. Samai is expected to make his first appearance at the High Court of Sierra Leone Holden at Bo, on the 16th January 2020.

Meanwhile, the Commission wishes to further reassure the public of its national commitment to controlling corruption at all levels. 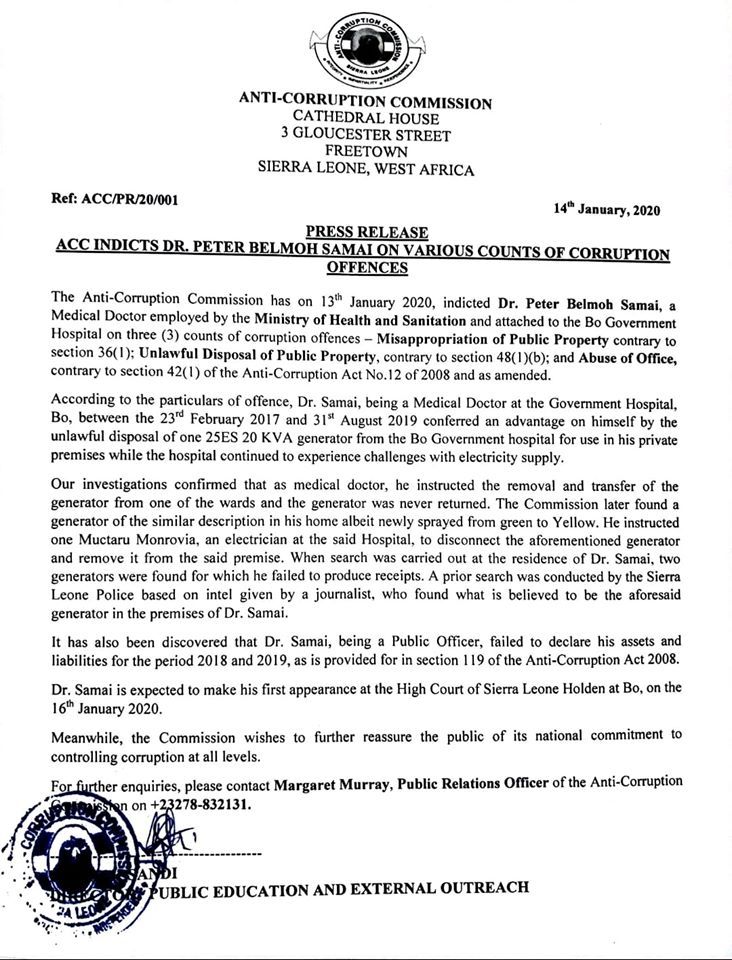