According to the particulars of offence, between 10th and 29th June, 2016, MESSRS MOHAMED SHERIFF, PAUL SANDI, and IDRISSA YILLAH, conspired to, and illegally withdrew, the sum of US$300,000 (Three Hundred Thousand United States Dollars) from one of SALCAB's Account, in the guise of paying for a false contract awarded to Base Construction Services; a company owned by Mr. Sandi, who was the then Permanent Secretary of the Ministry.
The actual justification they gave for this withdrawal was that the said amount was requested by the then President, His Excellency, Dr. Ernest Bai Koroma. However, there was no evidence to support that the same was given to him (the President).

This investigation was done by the ACC, in collaboration with Audit Service Sierra Leone; and serves as the first of several indictments, emanating from the Technical Audit into SALCAB, and four other Sectors. All three men will make their first court appearance on Friday 24th May, 2019.

Meanwhile, the Commission wishes to further reassure the public of its national commitment to controlling corruption at all levels. 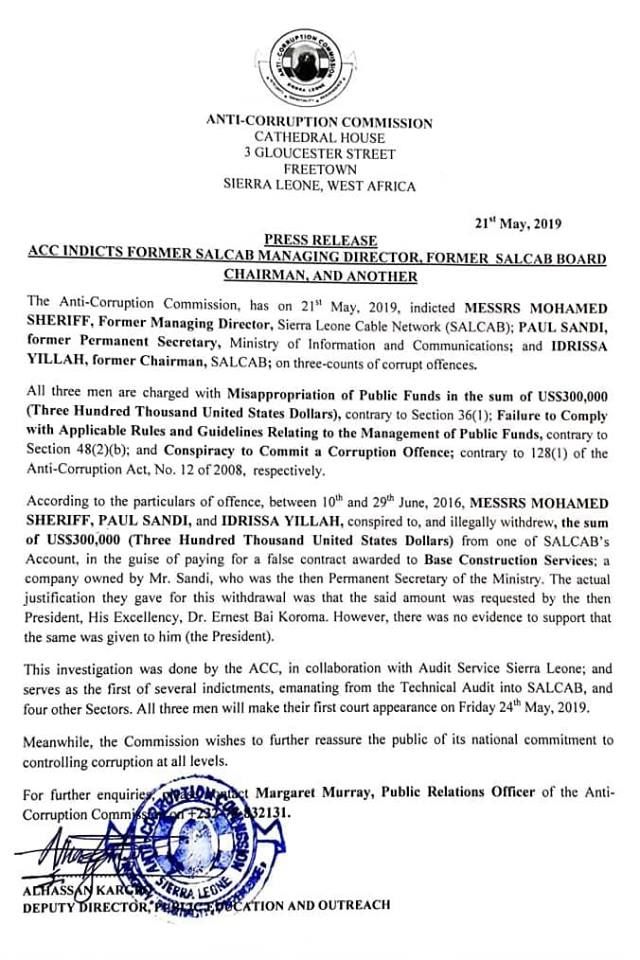 ACC TAKES PAY NO BRIBE TO SAIAMA IN KONO DISTRICT