ACC REACTS TO ALLEGATIONS OF CORRUPTION IN THE SIERRA LEONE PARLIAMENT

The Anti-Corruption Commission (ACC) notes public reactions and rightful concerns on allegations of corruption within the House of Parliament in Sierra Leone, emanating from the 2019 Perceptions Survey Report commissioned in April, 2020, by the Public Financial Management Consortium led by the Centre for Accountability and Rule of Law (CARL), in which the respondents said, Parliament is the 4th Most Corrupt institution in Sierra Leone and Parliamentarians are the 2nd Most Corrupt persons.

Moreover, our attention has been drawn to an interview granted by a Member of Parliament, Hon. Hindolo M. Gevao, to the British Broadcasting Corporation (BBC) Focus on Africa Programme on Wednesday 9th September, 2020, in which he stated that, to his knowledge there are instances of corruption happening in Parliament.

The Commission wishes to reaffirm to the general public that it had immediately commenced probing into the issue by taking statement from the said Parliamentarian. He confirmed the general claim that Parliamentarians or Parliament is corrupt but did not provide any specifics – names, instances, persons involved, modus operandi – which to us fell short of any meaningful “lead” or helpful evidence. The investigations will continue and it appears we would have to rely on other sources if we are to make the progress that we desire on this, considering the seriousness of the claim by Hon. Gevao.

In that regard, the Commission is requesting all persons who have paid monies to, or from whom monies have been solicited by any Member(s) of the current Parliament, or Staff of Parliament, in order to approve their Appointments, Institutional Budgets, Legislative Instruments, or such other public service, etc., to make same known to the Anti-Corruption Commission with, where possible reasonable specifics to assist with the investigation.

Reports could be made, in person or anonymously at the Commission’s 3 Gloucester Street, or Lotto Building, Tower Hill offices in Freetown; 10 Bo-Pujehun Drive, Kebbie Town, Bo; Reservation Road, Off Maxwell Khobe Street, Kenema; Mena Hills, Makeni; 27 Conteh Street, Port Loko, and 37 Masingbi Road, in Kono; or on hotlines 077-985-985, 077-986-986, or 515 free on all networks, except Qcell. WE assure members of the public full protection of identity where such is required or requested.

In a similar vein, the ACC wishes to inform the public that the investigation into allegations of corruption involving the Clerk of Parliament, Hon. Paran Tarawally and Hon. Ibrahim Tawa Conteh of Constituency 132, it had commenced in November, 2019 is at an advanced stage for conclusion. The public will be accordingly updated on developments regarding the said investigations. The ACC reassures the general public of its commitment to fight corruption at all levels in Sierra Leone.

DIRECTOR OF PUBLIC EDUCATION AND OUTREACH 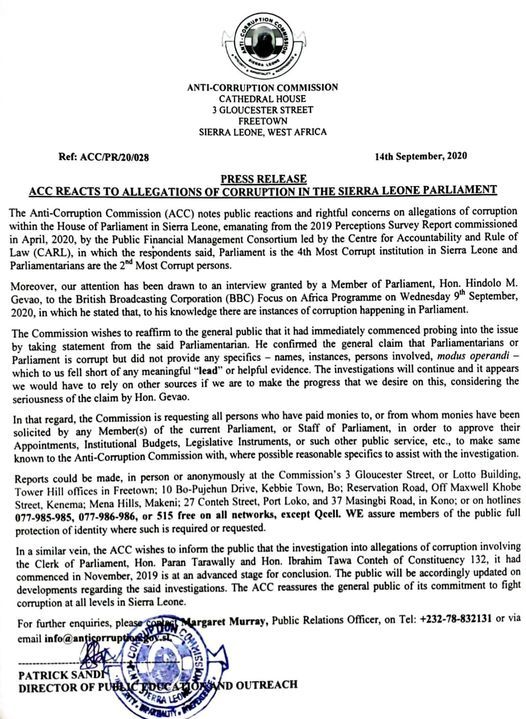 ACC CO-OPTS RELIGIOUS LEADERS IN THE FIGHT AGAINST CORRUPTION