The Anti-Corruption Commission (ACC) hereby informs the general public that in addition to the identification and recovery of all 47 Laptops that were stated to be missing in the COVID-19 Audit Report 2020, it has also received the sum of Le 220,000,000.00 (Two Hundred and Twenty Million Leones) in cash, as settlement of issues relating to the Forty-Seven Laptops being supplied to the National COVID-19 Emergency Response Centre contrary to the contracted specification. There is a balance of Le 34,000,000.00 (Thirty-Four Million Leones) left to be recovered following a settlement for Le 254,000,000.00 (Two Hundred and Fifty-Four Million Leones).

The said money was paid jointly by a staff of NACOVERC responsible for logistics, the Head of Procurement at the Integrated Health Project Administration Unit (IHPAU) of the Ministry of Health and Sanitation and a businessman responsible for the supply of the items after they were given ultimatum to pay in full within a week or face the full consequences of the law.

The formula applied is the difference in the National Public Procurement Authority approved Price Norm and the actual price paid for the Laptops purchased (which was the most disadvantageous to the Settlers and three times more advantageous to the State) as opposed to the difference in the price; considering that many of the laptop computers supplied, though all not in accordance with the contracted specifications, but were confirmed by our IT Consultants to be better in quality and more expensive than those contracted for by IHPAU. All 47 laptops will now be returned to NACOVERC today.

We thank and appreciate Audit Service Sierra Leone (ASSL) for their diligence and cooperation in helping to combat corruption in Sierra Leone and Parliament for their support.

For further enquiries on this and other ACC matters, please contact MORIS IBRAHIM KANTEH, Assistant Public Relations Officer on +232-78-832131 or via email info@anticorruption.gov.sl. 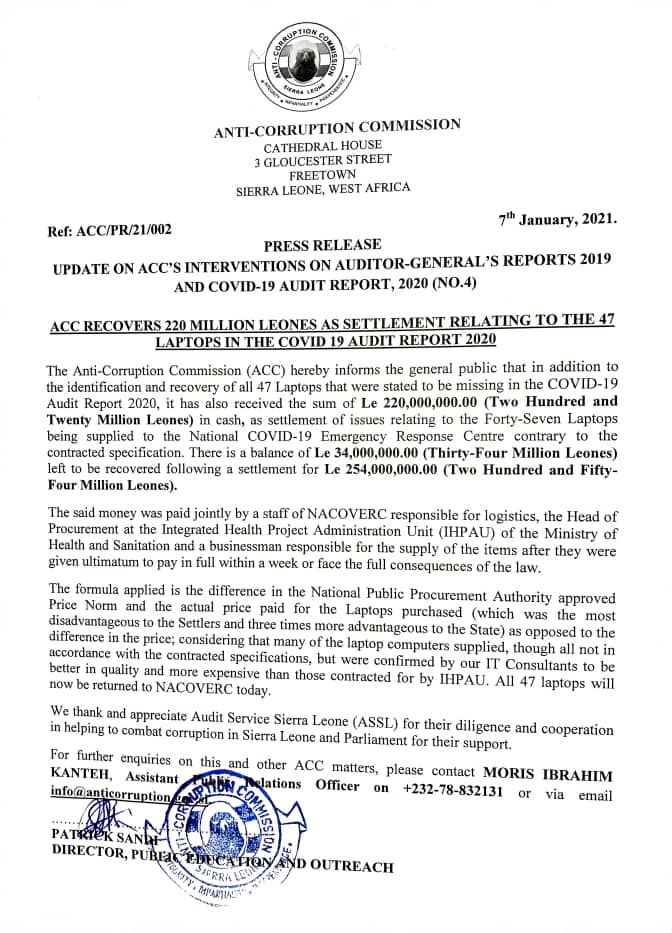