An independent and impartial institution established for the prevention, investigation, prosecution and punishment of corruption and corrupt practices and to provide for other related matters.

The Anti-Corruption Commission (ACC) wishes to inform the general public that the High Court of Sierra Leone, Holden in Freetown, presided over by the HON. JUSTICE MIATTA M. SAMBA, JA, has on 4th March, 2020, convicted ALFRED KALLON (1st Accused) of No. 5 Tough Drive, Freetown, former Senior Human Resource Officer at the Office of the Administrator and Registrar-General, on thirty four (34) counts of corruption offences.MR. ALFRED KALLON, AMBASSADOR ALIEU IBRAHIM KANU, and SULAIMAN ISSA TURAY were standing trial for various corruption offences, including, but not limited to, Conspiracy to Commit a Corruption Offence, and Abuse of Office, contrary to sections 128(1), and 42(1) of the Anti-Corruption Act 2008 respectively. The three men were accused of using their offices to improperly make request for, facilitate and ensure access to the Republic of Sierra Leone Service Passport by, and for the use of, persons who are not entitled to be holders of Service Passports in order to illegally facilitate their travel overseas as Public Servants.

HON. JUSTICE MIATTA SAMBA ruled that the Convict, ALFRED KALLON, pays a fine of ONE HUNDRED AND FIFTY MILLION LEONES (Le 150,000,000/00) for the first count and then made it cumulative for all counts, thereby ensuring Mr. Kallon be entitled to pay only the said amount in total for all 34 counts on which he was convicted; or serve a jail term of three (3) years. The second and third accused persons, AMBASSADOR ALIEU IBRAHIM KANU and SULAIMAN ISSA TURAY, were both acquitted and discharged on all counts they were charged with.

In another development, the former Director of Surveys and Lands of the Ministry of Lands, Country Planning and the Environment, CHRISTIAN HAROLD ABIOSEH PRATT, who was charged on a single count of Abuse of Office in relation to land distribution, was on 4th March, 2020 acquitted and discharged by Justice Miatta Maria Samba, JA. The Commission is reviewing these files and will appeal the discharges.

The Commission wishes to reassure the general public of its resolve to fight corruption at all levels and pursue justice at all times without fear or favor. For further enquiries, please contact MARGARET MURRAY, the Public Relations Officer on +232-78-83-21-31 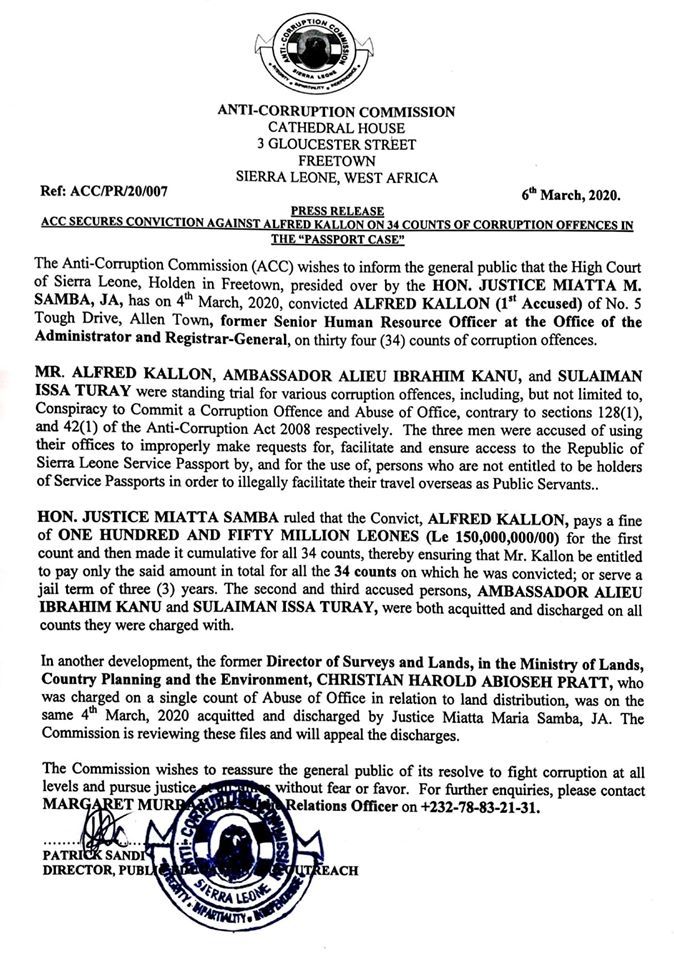