The High Court of Sierra Leone Holden at Bo presided by the HONOURABLE JUSTICE ANTHONY GANDA has on Thursday 13th January 2022, sentenced EDWARD MUSTAPHA LUSENI, a former staff of the Anglican Diocese of Bo, and of No 2 Luseni Street, Gbondo Town, Bo, to pay a fine of THIRTY MILLION LEONES(Le 30,000,000)or serve THREE YEARS imprisonment following his conviction on six (6) out of eight (8) counts of corruption offences.

EDWARD MUSTAPHA LUSENI was standing trial together with Bishop Emmanuel Tucker, Bishop of the Anglican Diocese of Bo, on eight (8) counts of Misappropriation of Donor Funds contrary to Section 37(1) of the Anti-Corruption Act No. 12 of 2008. However, Bishop Emmanuel Tucker was acquitted and discharged on all eight counts, while EDWARD MUSTAPHA LUSENI was convicted on counts 3 to 8 and acquitted and discharged on counts 1 and 2.

THE HONOURABLE JUSTICE ANTHONY GANDA further ordered that, within three months from the date of conviction, EDWARD MUSTAPHA LUSENI should pay to the Anti-Corruption Commission the sum of a further THIRTY MILLION LEONES (Le 30,000,000) as restitution.

It could be recalled that, in April 2018, the Anti-Corruption Commission filed an indictment relating to the misappropriation of donations made by the Trinity Wall Street in the United States of America to the Anglican Diocese of Bo meant for the provision of relief supply for the Ebola epidemic and for the provision of agricultural and educational support for the south and eastern provinces of Sierra Leone.

The Commission wishes to reassure the general public of its firm resolve to curbing corruption at all levels in Sierra Leone. 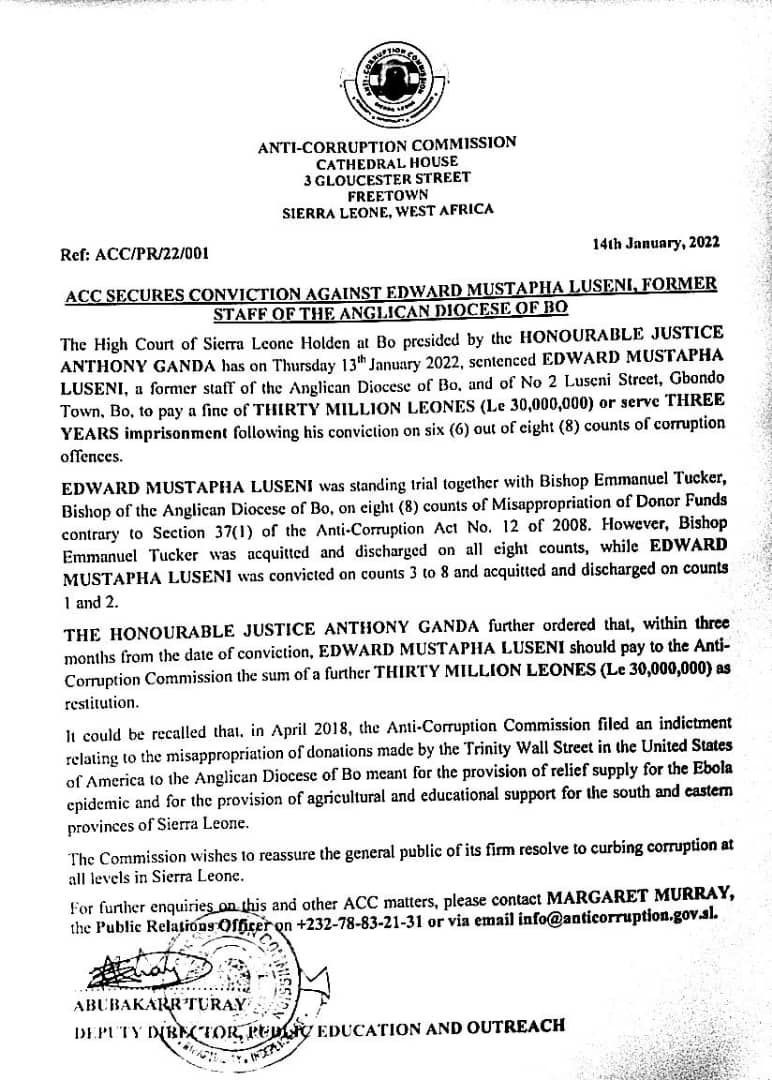