The Hon. Justice Komba Kamanda convicted Akuna Daniel Shorunkeh Sawyer, on  Eleven (11) Counts of corruption charges; Misappropriation of Donor Funds, contrary to Section 37(1) and Conspiracy to Commit a Corruption Offence, contrary to Section 128(1)(a), of the Anti-Corruption Act  No. 12, of 2008. The learned Judge sentenced Akuna Daniel Shorunkeh Sawyer to a cumulative fine of Four Hundred and Sixty Thousand New Leones (Nle 460,000) or three years imprisonment. The Judge further ordered that the convict pays back to the ACC within six months, from the date of the judgment, One Billion, Three Hundred and Forty Nine Thousand, Five Hundred and Thirty Thousand (Old) Leones (Le 1,349,530,000), being monies he misappropriated and conspired to misappropriate from donor funds meant for the people of Sierra Leone.

Biasie Turay, Mohamed Ishmyle Bangura and Abubakarr Kanu were each convictedon one Count and each sentenced to pay a fine of Thirty Thousand New Leones (Nle 30,000) or three years imprisonment.

Moses Ogendeh Kamara was convictedon Counts 2, 3, and 4 of the charges; Conspiracy to Commit a Corruption Offence, contrary to Section 128(1)(a), and Misappropriation of Donor Funds, contrary to Section 37(1) of the Anti-Corruption Act  No. 12, of 2008. He was sentenced to a cumulative fine of One Hundred and Ten Thousand New Leones (Nle 110,000) or three years imprisonment.

It could be recalled that, Akuna Daniel Shorunkeh Sawyer, and Seven Others, were on 1st December, 2016, indicted by the ACC for misappropriating and conspiring to misappropriate donor funds meant for the people of Sierra Leone.

In this regard, the Commission wishes to reassure the general public of its relentless commitment to protecting donor funds and resources at all times. For further enquiries on this and other ACC matters, please contact Sylvanus Blake, the Assistant Public Relations Officer on +23278832131 or via email info@anticorruption.gov.sl. 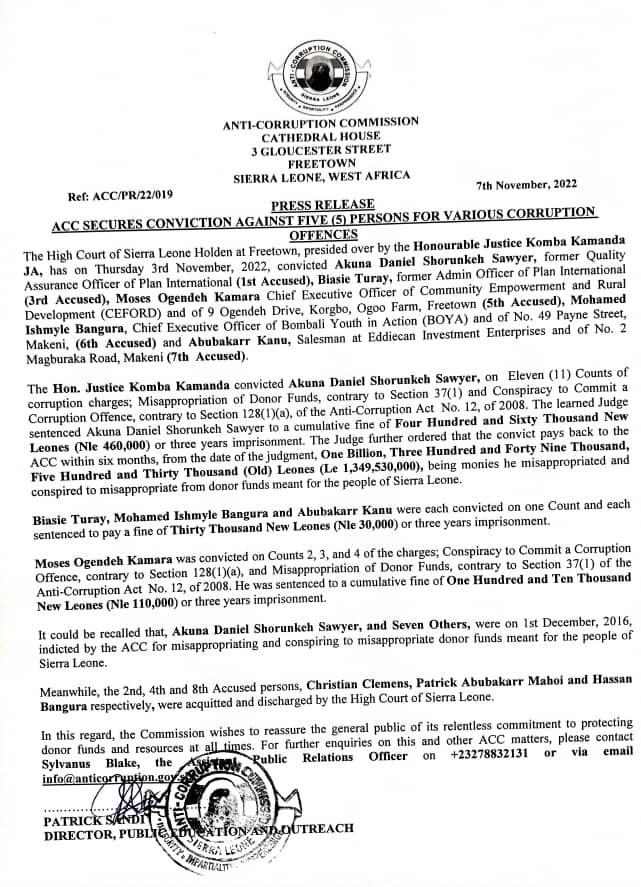