The High Court of Sierra Leone Holden at Makeni presided over by the HONOURABLE JUSTICE UNISA KAMARA has on 13th July 2022, convicted and sentenced FODAY SULAIMAN BANGURA, a Private Security Guard of the Lion Rock Security Agency, and of 16 Maguidi Street, Makeni, to pay a fine of FIFTY MILLION LEONES, i.e. FIFTY THOUSAND LEONES (new leone) or serve FIVE YEARS imprisonment following his conviction on ONE COUNT of corruption offence.    FODAY SULAIMAN BANGURA was convicted on the count of Engaging in Academic Malpractice, contrary to Section 128 (3), of the Anti-Corruption Act No. 12 of 2008 as amended by the Anti-Corruption Act No. 9 of 2019.

The ACC was represented by Timothy P.M. Sowa Esq.

The Commission wishes to reassure the general public of its firm resolve to curbing corruption at all levels in Sierra Leone.

For further enquiries on this and other ACC matters, please contact SYLVANUS BLAKE, Assistant Public Relations Officer on +232-78-83-21-31 or via email info@anticorruption.gov.sl. 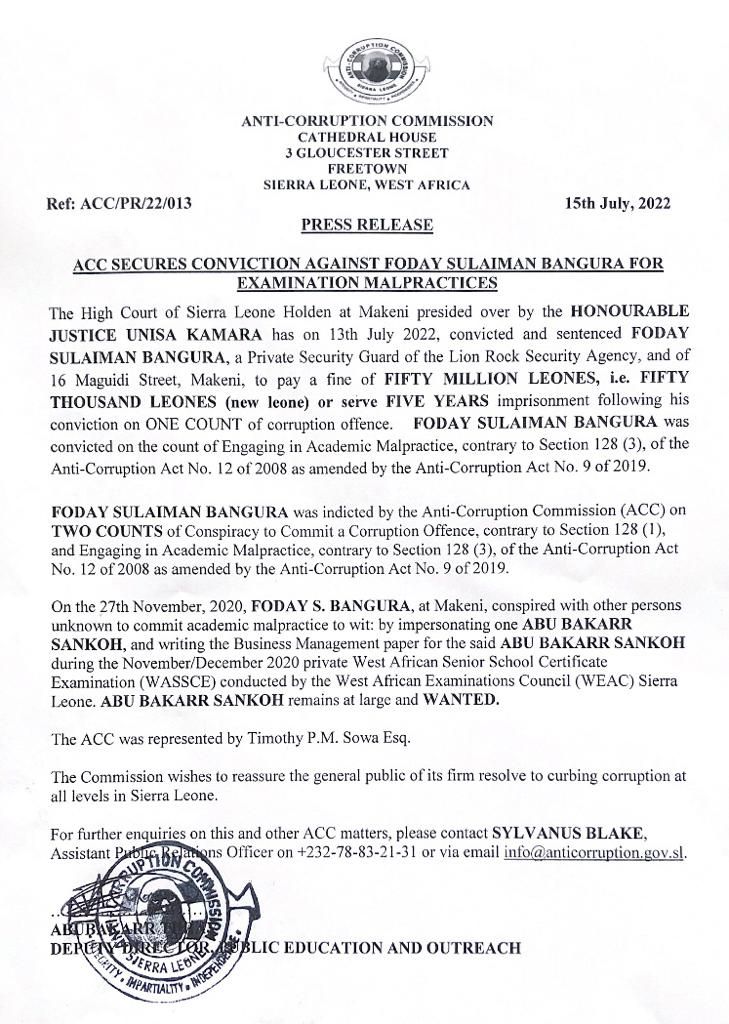 RESIDENTS OF SUMBUYA TOWN SEE ANTI-GRAFT MESSAGES AS A BLESSING