The High Court of Sierra Leone, Holden at Freetown, presided over by the HONOURABLE JUSTICE MIATTA M. SAMBA (JSC), has on Thursday 5th August, 2021, convicted and sentenced YEABU M. D KAMARA, former Chairperson of the Board of Trustees, National Social Security and Insurance Trust (NASSIT), and of No. 14 Third Road, Off Regent Road, Hill Station, Freetown, to pay a fine of FIFTY MILLION LEONES (Le 50,000,000.00) immediately, on FOUR (4) out of SIX (6)Counts of corruption offences.

The HONOURABLE JUSTICE MIATTA SAMBA (JSC) fined YEABU M. D. KAMARA on the third count ofWillfully Failing to Comply with the Law Relating to the Tendering of Contracts, and cautioned and discharged her, on the first, second and fourth counts of Engaging in a Project without Prior Planning and of Conspiracy to Commit a Corruption Offence respectively. Mr. Joseph Sedu Mans was saved from conviction by the cold hand of Death, but his corrupt role was well elucidated by the court.

It could be recalled that,on the 20th December, 2018, the ACC filed an indictment against YEABU M. D. KAMARA and JOSEPH SEDU MANS (deceased) for the misappropriation of Six Billion, Five Hundred and Ten Million, Two Hundred and Ninety Thousand Leones (Le 6,510,290,000), being funds meant for the SISIMI NASSIT Medical Project, a joint venture Special Project Vehicle meant for the development, construction and delivery of an urgent care delivery service system that should provide quality medical and diagnostic services in Sierra Leone. This follows on-going recovery of One Billion Leones (Le 1,000,000,000) from the former Deputy Director-General of NASSIT, Five Hundred Million Leones (Le 500,000,000) from the former Resident Engineer and Two Hundred Million Leones (Le 200,000,000) from the Project Officer, SISIMI.

In this regard, the Commission wishes to reassure the general public of its relentless commitment to protecting public funds and resources at all times.

For further enquiries on this and other ACC matters, please contact MARGARET MURRAY, the Public Relations Officer on +232-78-832131 or via email info@anticorruption.gov.sl. 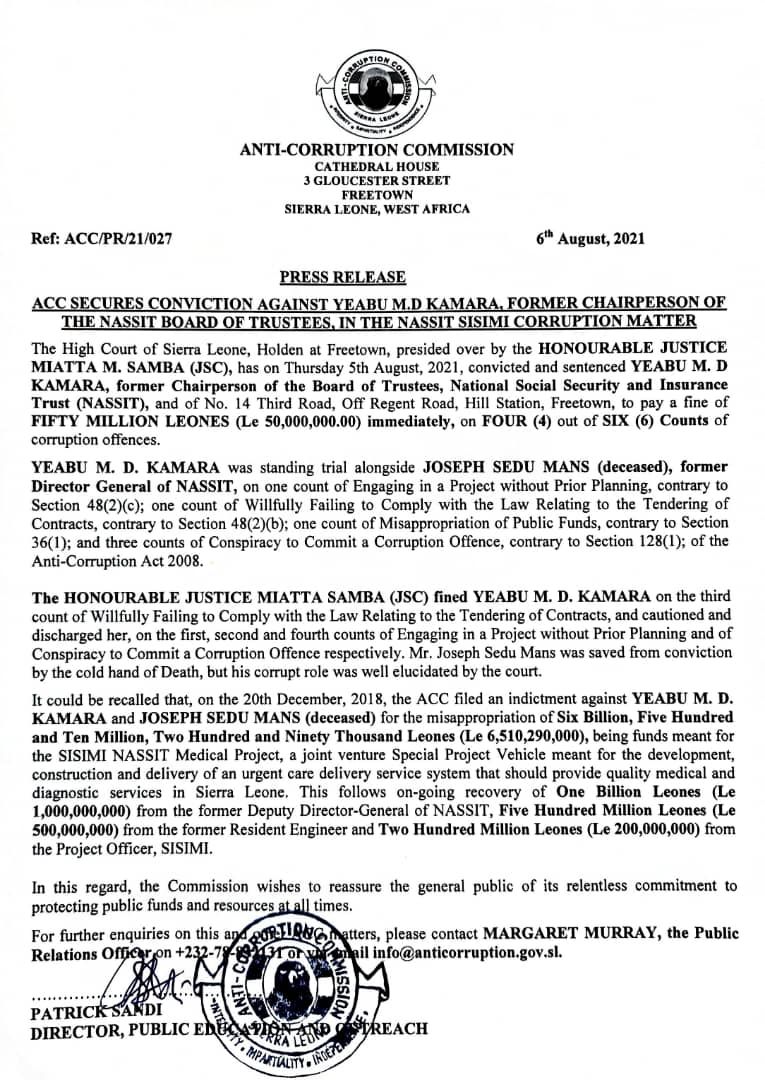