The 2020 Afro-Barometer Round 8 Survey Report, presented to the Government of Sierra Leone in Freetown, on 28th September, 2020, by the Institute for Governance Reform (IGR), establishes that, Corruption prevalence in the country has continued to experience a decline from as high as 70% in 2015 to a new lowest ever of 40% in 2020. The Public can recall that a decline to 43% was recorded in 2018. This is a clear confirmation of the impact of the work of the Commission and other stakeholders in combating and controlling corruption in Sierra Leone.

Similarly, there is a recorded overall decline in most public sector institutions though there is a slight rise between 2018 and 2019. The Police are still most widely seen as corrupt and leads the table with 62% though that is a decline as compared to 69% in 2012. The situation remains less with other institutions, but work has to be done to avoid a reversal to the position in 2015, as Parliament follows the Police with 41%, Tax Officials with 35%, Civil Servants with 30%, right down to Religious Leaders with only 11%.  As for citizens’ experience with corruption, 55% paid a bribe to obtain police assistance, 53% paid a bribe to obtain medical care, 40% paid a bribe for identity documents, and 41% paid a bribe to avoid problems with the police.  Importantly, 20% of Sierra Leoneans paid a bribe for public school services, a 13% decline to 2018.  When compared to 2018, there has been an increase in the proportion of citizens who say they paid bribes for medical care and identity documents, and to avoid problems with the police. In 2018, 37% says they can report corruption without fear, whilst 59% expressed risk of retaliation. In 2020, only 28% says they can report corruption without fear of the risk of retaliation; whilst 61% expressed fear of retaliation. Significantly, 80% wants the news media to constantly investigate and report on Government mistakes and corruption.

In 2015, only 18% approved Government’s performance in the fight against corruption. This has improved significantly in the last two years. In terms of equality before the law, 52% of citizens reckons people are “always” or “often” treated equally under the law, with 48% saying otherwise, and that 42% of officials who commit crimes “always” or “often” go unpunished.

In the light of this, the ACC will continue to study this Report, and others, to help us shape the work we do with a view to making corruption a very risky and expensive venture. We welcome the confirmation of the overall reduction in corruption prevalence and will continue working towards further reduction and control.

In this regard, the Commission continues to assure the general public of its relentless resolve to fight all levels of corruption and to effectively control it in Sierra Leone.

For further enquiries on this and other ACC issues, please contact MORIS  I. KANTEH, Public Relations Assistant on +232-99-926747 or by email to info@anticorruption.gov.sl. 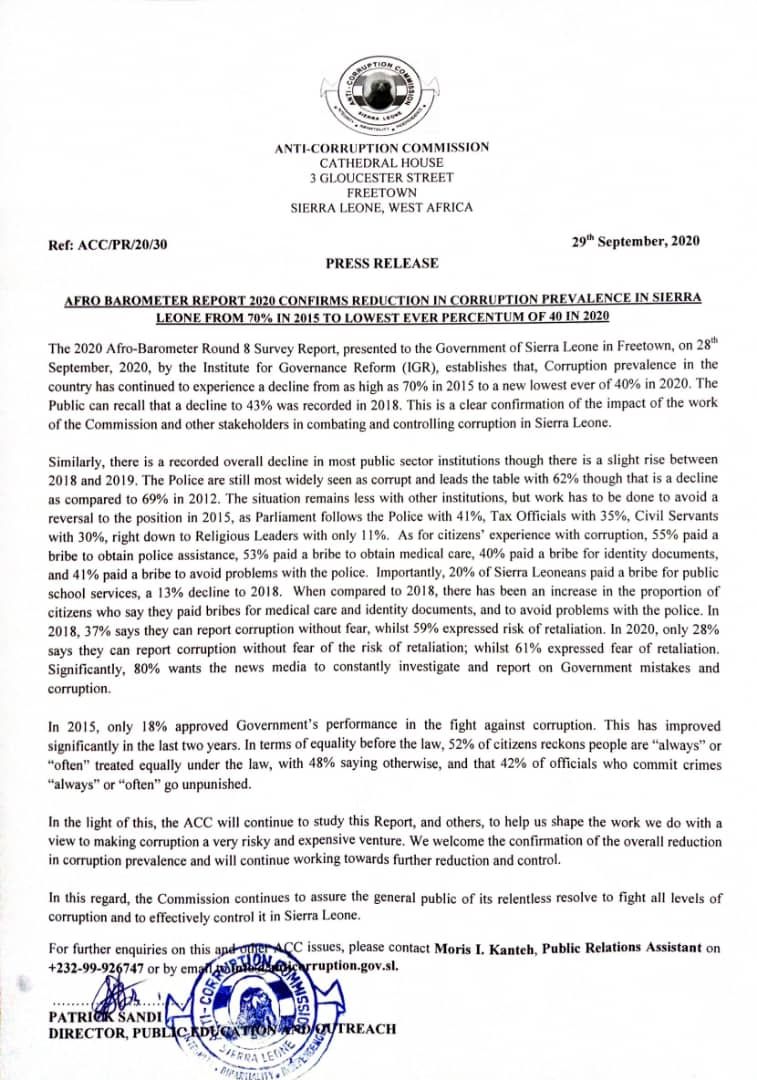