The Anti-Corruption Commission (ACC), wishes to inform the general public that, the Court of Appeal of Sierra Leone, Holden in Freetown, and presided over by THE HONOURABLE JUSTICE MIATTA MARIA SAMBA, JA, THE HONOURABLE JUSTICE ANSUMANA IVAN SESAY, JA AND THE HONOURABLE JUSTICE SULAIMAN BAH, JA; on 19th January, 2021, upheld the conviction and sentence against APPELLANTS, EDWARD KING AND SORIEBA KAMARA, both former officials of the Ministry of Information and Communication.

It could be recalled that, on the 27th February, 2019, EDWARD KING, Acting Director of Information and SORIEBA KAMARA, Senior Accountant in the Ministry of Information and Communication, were sentenced to THREE YEARS MANDATORY IMPRISONMENT, following their conviction at a High Court, Holden in *Freetown presided over by JUSTICE FATMATA BINTU ALHADI, for corruption offences.

Their conviction came after they pleaded guilty to the counts of Misappropriation of Public Funds and Public Revenue, contrary to Section 36(1); Failure to Comply with Applicable Procedures and Guidelines Relating to the Management of Public Funds, contrary to Section 48(2)b; and failure to pay tax payable to a public body, contrary to Section 48(1)d of the Anti-Corruption Act 2008, arising from the Two Hundred and Six Million Leones (Le206,000,000) that was said to have been partly misappropriated following the allocation of funds for Commissions of Inquiry sensitizations by the Ministry of Information and Communication.

In the judgment, the three Justices of the Appeals Court dismissed their grounds of appeal and upheld the Trial Judge’s conviction and sentence against both Appellants to a mandatory prison term of THREE YEARS.

The Commission appreciates the judgment of the Appeals Court Justices, in upholding the custodial sentence, earlier handed down, as it serves as an effective deterrent to persons who would want to engage in acts of corruption and welcomes such bold move and posture from the Judiciary. It also wishes to reassure the general public of its determination to curb all levels of corruption throughout Sierra Leone.

For further enquiries on this and other ACC matters, please contact MORIS IBRAHIM KANTEH, Assistant Public Relations Officer on +232-78-832131 or via email info@anticorruption.gov.sl. 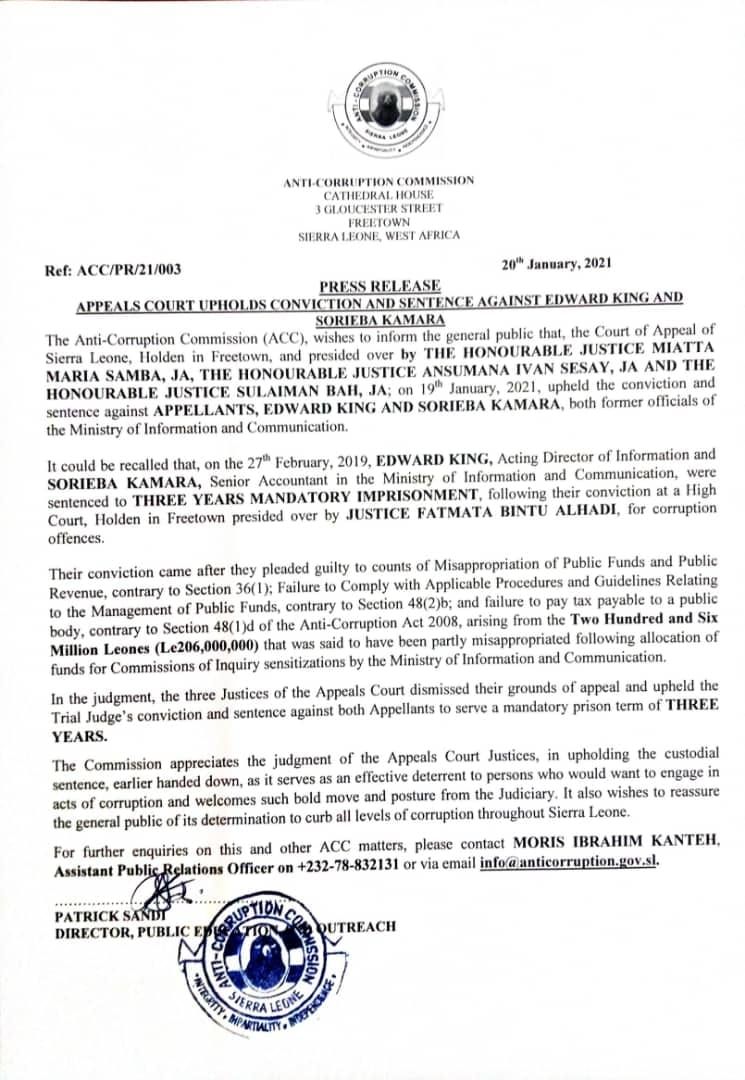