The second resumed ninth session of the Conference of the States Parties has just ended in Vienna, Austria with an overview of the United Nations Convention against Corruption (UNCAC) review process, in order to identify challenges and good practices and to consider technical assistance requirements that would ensure effective implementation of the Convention. Sierra Leone was represented by the ACC Commissioner, Francis Ben Kaifala Esq., and his Deputy, Shollay Davies.

In accordance with the multi-year work plan for the analytical work of the Group, covering the period 2017–2019, the second resumed ninth session of the Group focused on analyzing the successes, good practices, challenges, observations and technical assistance needs emanating from the country reviews of Chapter III (Criminalization and Law Enforcement) and Chapter IV (International Cooperation) of the Convention.  The Implementation Review Group held six meetings, which were chaired by Maria Consuelo Porras Argueta of Guatemala.

Presenting an update on the progress made in the country reviews of the first and second cycle of the UNCAC implementation, the secretariat reported that 166 executive summaries out of a total of 180 countries had been finalized under the first review cycle. Under the second review cycle, 12 executive summaries had been finalized and several were in the process of being finalized. Also, the majority of State Parties under review in the second and third year of the second cycle had nominated their focal points, including Sierra Leone, well before the start of the reviews, and therefore had the opportunity to undertake the early preparation of their self-assessment checklist.

In addition to the information provided by the secretariat regarding measures taken at the national level, discussions were also held based on the findings of the mechanism in relation to Chapter III of the Convention on Criminalization and Law Enforcement, focusing on witness protection and the protection of reporting persons, as well as efforts made by States to enhance their investigative capacities. Regional initiatives in West and East Africa on whistle –blower and witness Protection were highlighted to which the ACC Commissioner made a commitment to pursue in Sierra Leone through engagement with stakeholders for the promulgation of a Whistle-blower and Witness Protection Law in line with Article 32 of the Convention.

During the discussion, various distinguished delegates informed the Group about measures taken to address the findings of the first review cycle. For Sierra Leone, key areas of concern for technical assistance include legislative reform to deal with criminalization of bribery by foreign public officials, whistle blower and witness protection law, and a legislation on Proceeds of Crime to deal with asset recovery as provided for in Chapter V of the UNCAC.

Several speakers also highlighted the importance of successfully fighting corruption in order to achieve the Sustainable Development Goals (SDGs) as corruption poses a major challenge for their achievement especially in least developing countries.

As part of the discussions, the conference also examined a set of non-binding recommendations and conclusions emanating from the first and second review cycle, intended for policy makers to consider when reviewing or adopting national anti-corruption measures.  In his contribution on the need for international cooperation as contained in the recommendations, the ACC Deputy Commissioner highlighted the issue of immunity under the Geneva Convention for foreign public officials and the applicability of Article 16 of the Convention that seeks to criminalize the bribery of foreign public officials and officials of public international organizations. State Parties however, noted the relevance of immunities in this context and encouraged public international organizations to waive such immunities in appropriate cases. It was proposed that the set of non-binding recommendations and conclusions would be further deliberated upon at the 8th session of the conference of State Parties in the form of a draft resolution.  At the margins of the conference, meetings were held with officials of the United Nations Office on Drugs and Crime on technical assistance on the ongoing review mechanism.

The Sierra Leone delegation also attended, back to back, Training for Focal Points and Governmental Experts participating in the Second Cycle of the Mechanism for the Review of the Implementation of the UNCAC with the objectives of equipping participants with the requisite substantive expertise related to the provisions of the Convention, train participants in the methodology for country reviews, enable the participants to familiarize themselves with the comprehensive self-assessment checklist and the related guidance note, as well as build the capacity of participants to reproduce the training at the national level.

It could be recalled that Sierra Leone was reviewed by Thailand and Benin in the first review cycle dealing with Criminalization and Law Enforcement and International Cooperation (Chapter III and IV of the Convention) and served as one of the reviewing countries for Tanzania.

In the second review cycle, the country participated as a reviewing country for Italy and Cameroon while also being reviewed by Togo and Luxemburg. 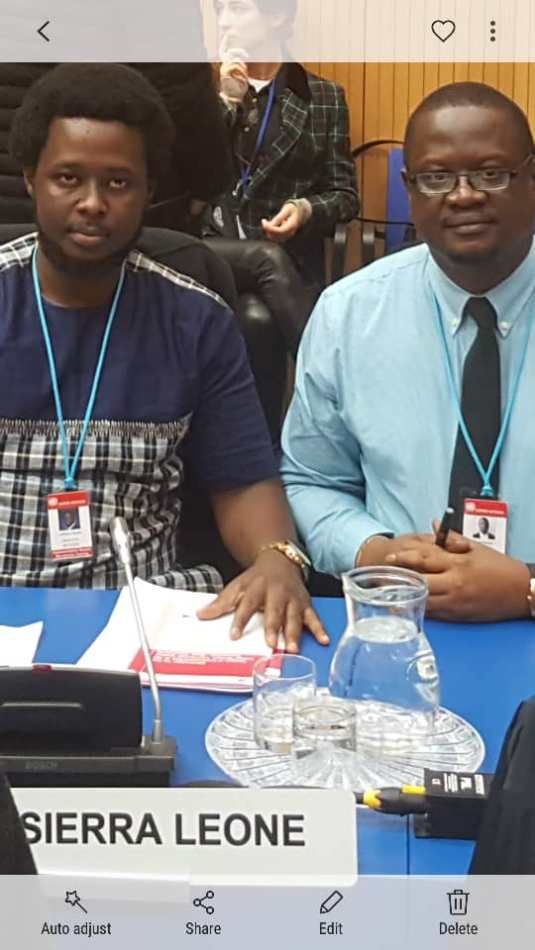