DEFAULT OF DECLARATION OF INCOME, ASSETS AND LIABILITIES BY PUBLIC OFFICERS

In addition, Section 122A(1) of the said Amendment provides that “A public officer who, without reasonable cause, fails to submit his/her Assets Declaration Form or knowingly records false, inaccurate or misleading information in the declaration form shall, in addition to any other penalty imposed under this Act, be liable to administrative sanctions as set out in sub-section (5) as follows:

a)Withholding the salary of the Public Officer,

b)Suspend the Public Officer after one month of default but not more than three months; and

c)Dismiss the Public Officer after exceeding three months (This does not apply to only Positions for which removal from office is stipulated in the Constitution but applies to all).

Against this background, the Commission is informing ALL public officers that the deadline for the submission of Asset Declaration Forms, which was 31st March, 2020 has now elapsed. However, pursuant to Section 119(4) of the Anti-Corruption Act 2008, the Commissioner has extended the declaration period to, on or before the 31st May 2020.

Beyond the said date, default by public officers will be treated as deliberate and defaulters will face the applicable appropriate penalties as prescribed by law above. Anyone who has specific challenges should promptly notify the Commission speedy remedy.

In that regard, the Commission wishes to reassure the general public of its relentless commitment in curbing corruption at all levels in Sierra Leone, particularly, instilling integrity and accountability in public life which the Assets Declaration legal and regulatory regime is meant to ensure. 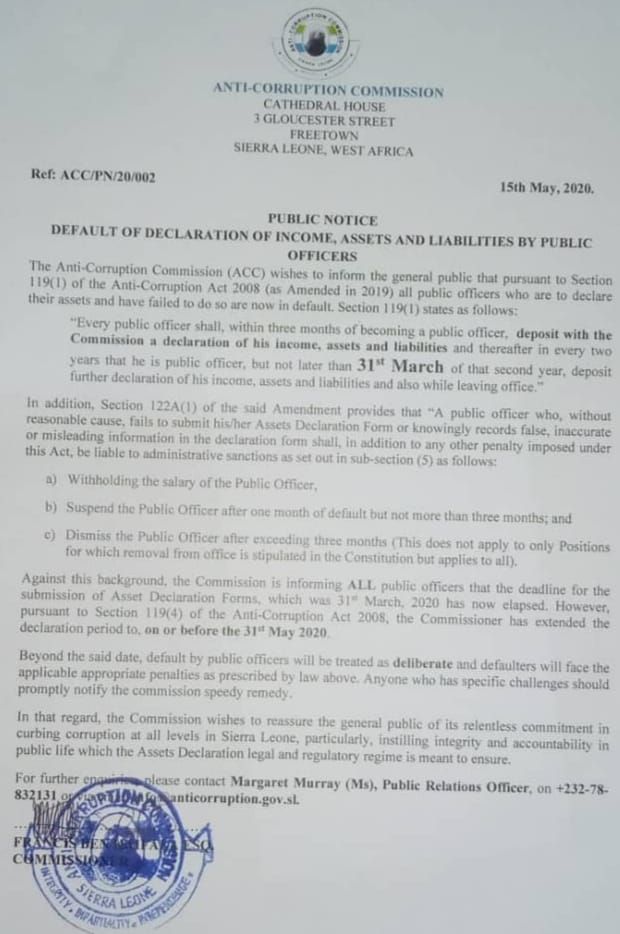