"ELIMINATE MONOPOLY, DISCOURAGE INCENTIVES AND FRUSTRATE OPPORTUNITIES, ARE KEY INGREDIENTS TO THE FIGHT AGAINST CORRUPTION," SAYS ACC COMMISSIONER IN PENDEMBU AND KAILAHUN

In his model nationwide “Meet the people Tour” on Thursday 3rd June 2021, at the Kailahun District Council Hall, Kailahun District, Eastern Province of Sierra Leone, a JSS 3 pupil of the National Secondary School in Kailahun, Mamawa Nyuma, dazzling and confident looking, with the features of a promising lawyer, asked in simple and precise words.  “Mr. Commissioner, Ben Kaifala, let me congratulate you for your laurels, remarkable results and ever ready disposition to lead Sierra Leone to a win in the ongoing war on corruption. We are proud of you. But Commissioner Sir, what can you tell me are the causes of corruption and how can we address them permanently?”

Responding to the question of Mamawa and many other concerns from the audience, ACC Commissioner, Francis Ben Kaifala Esq., said, “Eliminating monopoly in the administration of our resources and institutions, discouraging the existence of incentives that drive people into corruption and frustrating the opportunities that would lure people into the acts of corruption, are crucial ingredients to winning the war on corruption, especially preventing it”. He told his listeners, that to address the root causes of corruption; we need a positive and unbiased introspection, as those who display unbridled monopoly, incentives and opportunities are those who without regard for processes, procedures and best practices are flagrantly indulging in corruption and corrupt practices unchecked.

Mamawa as with others left the Kailahun District Council Hall with a smart answer to the problem of corruption. When further interviwed after the meeting, she said, “I wish as a nation, we will win the war on corruption, which is the major barrier to our fortunes as a country” in her soft tone. Everyone has a role to play in the fight against corruption and we should not give up, she emphasized. It then became even more apparent that the Town Hall stakeholders’ engagements by the ACC Commissioner was a re-radicalization and re-orientation drive to canvass and sustain public ownership and support for the fight against corruption.

Earlier on the same day, June 3, 2021, Francis Ben Kaifala engaged the people of Pendembu, and updated them on the progress made so far in the fight against corruption in Sierra Leone where he again requested the people to scrutinize and gauge his leadership as he is accountable to them.

The ecstatic and nostalgic son of the soil, Commissioner Kaifala was welcomed with colorful and irresistible pageantry as he danced with his mother Mrs. Tewa Kaifala, Paramount Chief, Upper Bambara Chiefdom, Hon. PC Foray Gondor and a galaxy of stakeholders to a local song produced and sang by a popular traditional singer fondly called Salia Bakavonday.

Delivering his statement at the two engagements, Commissioner Kaifala thanked the people of Pedembu and Kailahun for their support to him, his team and the overall fight against corruption.

Ben Kaifala told the gatherings that, “President Bio has waged war on corruption and he has sent me to pass on the message to every citizen of this nation that he is serious about it and the ACC under my leadership shall continue to act tough and I mean very tough against any person who will be involved in this wicked act of corruption, regardless of political and other persuasions”

He furthered that the fight against corruption is for the betterment of Sierra Leone, adding that, the engagements were meant to encourage and bolster public confidence  in order to raise concerns regarding the fight against corruption, service delivery and accountability. He urged the people to eliminate the spoilers’ mentality, which pre-supposes that once it is not mine, not yours, then no one cares what happens to it. He maintained that all state and public assets and resources belong to the people and should be protected. Mr. Kaifala re-affirmed the Commission’s commitment to protecting and safeguarding the interests of all Sierra Leoneans by holding duty bearers accountable.

In the separate engagements, whilst welcoming the Commissioner, the Paramount Chief of Upper Bambara Chiefdom, Pendembu, and the Deputy Chairperson of Kailahun District Council, PC Cyril Foray Gondor, and Doris B. Momoh respectively, said, they were pleased to host the Commissioner and his team for the first time in their respective jurisdictions, noting that such engagements will benefit the people and communities immensely. PC Cyril Foray Gondor, also stated that, the visit is an unforgettable history in Pendembu as their son Francis Ben Kaifala has returned home with laurels which demand celebration. 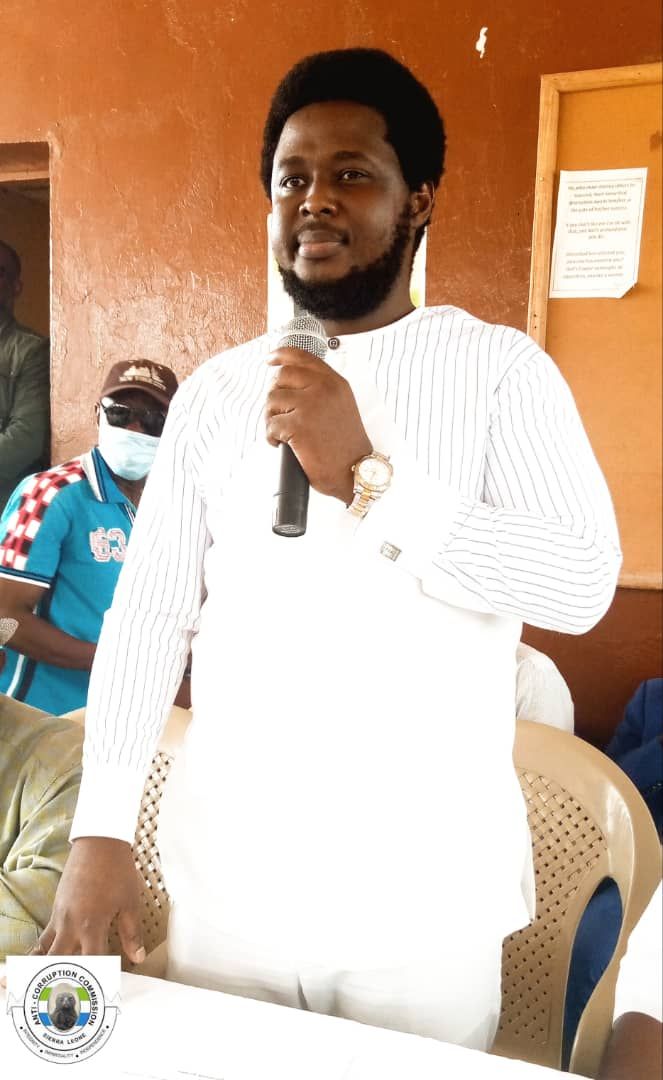