The Anti-Corruption Commission (ACC) wishes to inform the general public that Sierra Leone has again, and in three consecutive years, increased Sierra Leone’s score in the ‘Control of Corruption’ Indicator in the Millennium Challenge Corporation (MCC) Scorecard, moving from 79 percent in the 2019 Scorecard, to 81 percent in 2020, thereby adding 2  percentage points upwards.

Between 2017 and 2020, Sierra Leone has made a total of 32 percent upwards. In this year’s Scorecard, Sierra Leone made more gains in the ‘Control of Corruption’ indicator than many other countries including Nigeria, which scored Zero, Ghana 75 percent; Mali 71 percent; Ivory Coast 46 percent; Liberia 56 Percent; Cameroon 38 percent; and Mozambique 63 percent; Egypt 29%; Malawi 65; Zambia 75 percent, etc. Therefore, by this year’s report, Sierra Leone is among the top ten performers in our income category; one of the best performers in Africa; and number one in the Mano River Union.

In the 2020 MCC Report, Sierra Leone passed 13 of the 20 indicators, including the mandatory “Control of Corruption” indicator. Therefore, Sierra Leone is now “Compact Eligible.” This means Sierra Leone is eligible to benefit from the US Government Compact Fund between US$400 and US$600M. The MCC is an initiative of the Government of the United States of America to provide aid to developing countries to fight widespread poverty through economic growth. The MCC scorecard consists of 20 indicators under three broad categories: “Economic Freedom,” “Ruling Justly,” and “Investing in People.” The “Control of Corruption” Indicator falls under “Ruling Justly” category.

Similarly, Sierra Leone has also scored high in other global, regional, and domestic anti-corruption rankings within the past three years. In the Global Corruption Barometer of 2019, Sierra Leone ranked 3rd out of 35 African Countries surveyed on “Government’s Effectiveness in the Fight against Corruption.” In the Afro-Barometer of 2018, 54% of Sierra Leoneans agreed that the government is performing “very well” in the fight against corruption. According to the 2020 Afro Barometer Report, corruption prevalence in Sierra Leone declined from 70 percent in 2015 to 40 percent in 2020. Additionally, a National Perception Survey, conducted by the Center for Accountability and Rule of Law this year, revealed that 92 percent of the respondents were convinced the fight against corruption in Sierra Leone is on the right course. Similarly, Sierra Leone also moved 10 places upwards in the Transparency International’s Corruption Perception Index 2019 and scored its highest score to be positioned at 119.

In this light, the Commission wishes to reassure the general public of its determination to continue to focus on good governance indicators in the course of discharging its mandate.  For further enquiries on this and other ACC matters, please contact MR. MORIS KANTEH, the AssistantPublic Relations Officer on +232-78-832131. 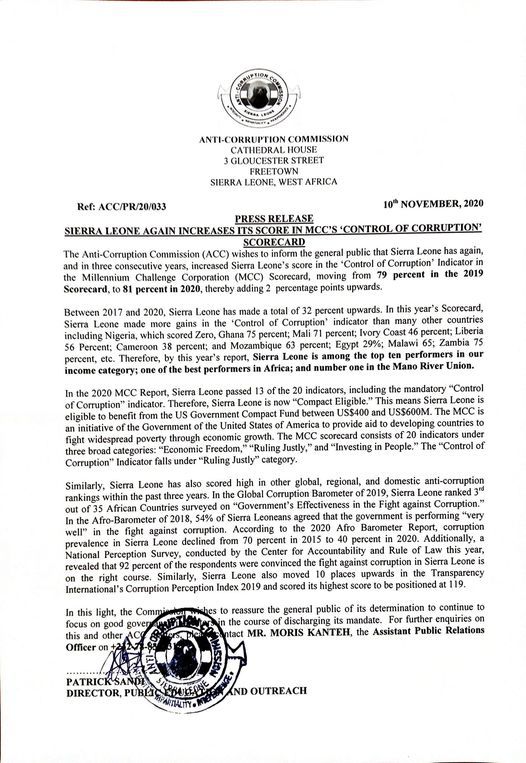 LAW vs. POLITICS: UNBUNDLING THE MIRAGE OF THE PROVINCE OF THE LAW IN ITS ETERNAL BATTLE FOR SUPREMACY OVER POLITICS