The Anti-Corruption Commission (ACC) wishes to inform the general public that Sierra Leone has, again, scored very high score (79 percent) in the Millennium Challenge Corporation (MCC) ‘Control of Corruption’ Indicator, making it five (5) consecutive years of huge progress in the country’s score in the MCC Scorecard since 2018.

Sierra Leone has consistently recorded outstanding scores in the MCC ‘Control of Corruption’ Scorecard, with 71 percent score in 2018, 79 percent in 2019, 81 percent in 2020, 83 percent in 2021 and now 79 percent, having previously failed the indicator in 2017 with 49 percent. Not just has the hitherto failing score been exponentially improved on since 2018, it represents a streak of 5 years of continuous passes and improvements, which is a testament of the Country’s resolve and undeterred energy aimed at corruption control since 2018.  It must be recalled that the country had never passed in the previous years, back-to-back, and therefore experienced Compact ineligibility; but is now fully eligible and the Compact development is underway.

Sierra Leone’s score in the ‘Control of Corruption’ indicator in 2022 (or FY 2023 as MCC prefers it) shows that it is ahead of many other countries including, Nigeria, which scored 10 percent, Ghana 77 percent; Mali 56 percent; Ivory Coast 58 percent; Guinea 50 percent; Liberia 54 percent; Cameroon 44 percent; Mozambique 60 percent; Egypt 32%; Zambia 67 percent, etc. Therefore, by this year’s Report, Sierra Leone is among the top ten performers in our income category; one of the best performers in Africa; and number one in the Mano River Union.

In the same vein, in the last four years, Sierra Leone has also consistently scored high in other global, regional, and domestic anti-corruption rankings. Sierra Leone has moved 15 places upwards in the Transparency International’s Corruption Perception Index 2021 and scored its highest of 34, above the Sub-saharan average to be positioned at 115, from 130 in 2017. In the Global Corruption Barometer of 2019, Sierra Leone ranked 3rd out of 35 African Countries surveyed on “Government’s Effectiveness in the Fight against Corruption.” According to the 2020 Afro Barometer Report, corruption prevalence in Sierra Leone declined from 70 percent in 2015 to 40 percent in 2020. Importantly also, a National Perception Survey, conducted by the Public Financial Management Consortium, led by the Center for Accountability and Rule of Law, published in 2020, revealed that 92 percent of the respondents were convinced the fight against corruption in Sierra Leone is on the right course.

The Commission wishes to reassure the general public of its unwavering determination to continue effective corruption control. For further enquiries on this and other ACC matters, please contact Mr. Sylvanus M. Blake, the Assistant Public Relations Officer on +232-78-832131. 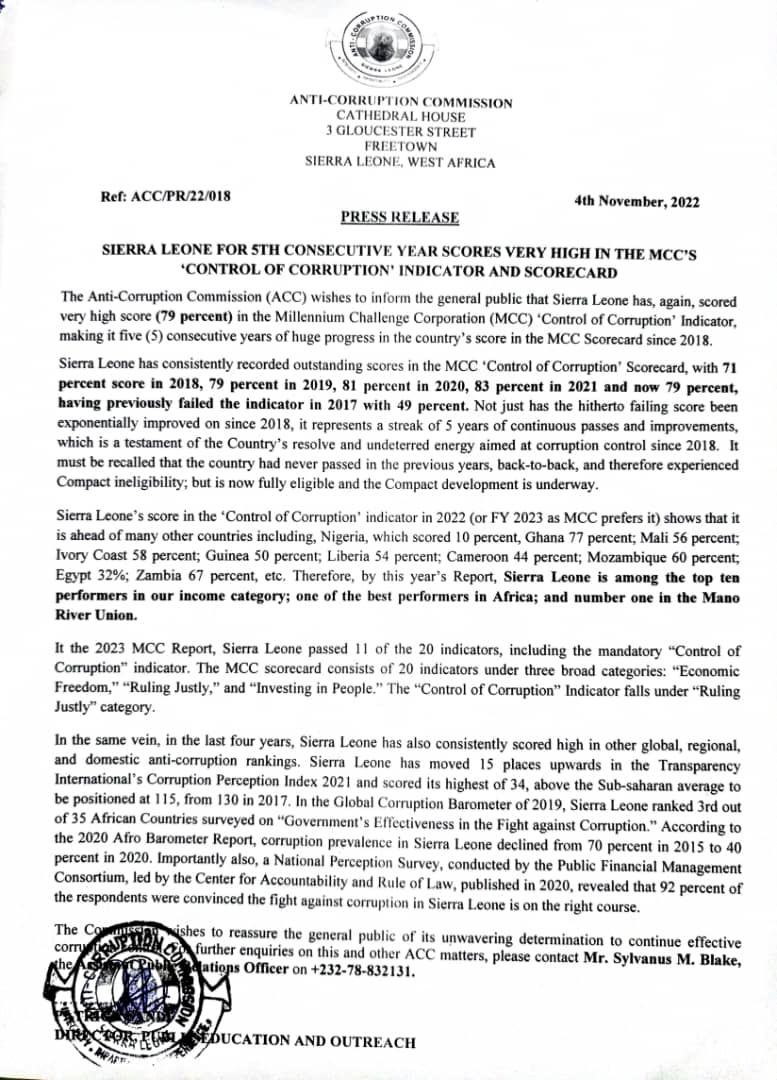