The Anti-Corruption Commission (ACC), in this fifth media release, wishes to update the general public of the actions and steps it has taken to address critical issues raised in Audit Reports of Sierra Leone, 2015-2018. These interventions focused on aspects of possible, or alleged corruption, and conduct inconsistent with the provision(s) in the Anti-Corruption Act of 2008.

After thorough reviews, and analysis of the aforementioned reports, a total of twenty-one (21) issues attracted the attention of the Commission for the purposes of investigating, prosecuting, or recovering public funds, public revenue, public property, as the case maybe; in accordance with Sections 7, and 48 of the Anti-Corruption Act of 2008 respectively. Below are the fourth set of issues, and areas of ACC interventions, and the outcomes of same.  The ACC has charged two (2) matters to court.  Additionally, there are thirteen (13) ongoing active investigations. Two (2) matters have been accordingly closed for lack of evidence.

In terms of recoveries returned to the State, the Commission has recuperated a total sum of Two Billion, Seven Hundred And Forty-Two Million, One Hundred And Eighty-Five Thousand, Three Hundred and Four Leones, and Sixty-One Cents (Le2, 742, 185, 304. 61) from cases and issues arising from audits.  In this release, the Commission focuses on the following MDAs: Ministry of Foreign Affairs and International Cooperation (MFAIC); the Ola During Children’s Memorial Hospital (Cottage Hospital); Ministry of Agriculture and Food Security (MAFS); and Electricity Distribution and Supply Authority (EDSA).

a.The Commission has completed investigations onto allegations that three MFAIC staff received a total sum of Forty-One Thousand, Four Hundred United States Dollars ($US41, 400.) after receiving Children and Education Allowances for their children, or children under their lawful custody while in foreign posts. Our investigations established that these claims were underserved due to the fact that the children concerned were all over-aged at the time of receipt. Taking a round view of the totality of the issues, and the options available, the Commission made a determination, and accordingly recommended that, it was in the best interest of the MFAIC, for the staff in question to pay back to the State the amount each received or face prosecution.

b.The audit report revealed that the MFAIC paid the sum of Fifty Thousand, Eight Hundred and Fifty United States Dollars ($US50, 850.) to a total of five foreign missions’ staff as Children and Education Allowances for people who were actually over-aged at the time of receipt, and therefore were not qualified to receive the said allowances.  The staff concerned have commenced repayment to the ACC.

c.In another development, ACC investigations into allegations of false claims in the MFAIC also confirmed that another set of four staff, working with Sierra Leone’s foreign missions, also received a total amount of Thirty-One Thousand, Five Hundred United States Dollars ($US31, 500.) as Children and Education Allowances. However, the investigations established that there is no evidence of children in their personal files. In this respect, the ACC has accordingly commenced thorough investigations for both sets of MFAIC workers, beginning with obtaining statements from the relevant authorities and persons of interest; and have also conducted examination of relevant documents.

The Audit Report alleged that the sum of Two Billion, Eight Million, One Hundred and Twenty-Two Thousand, Four Hundred and Forty-Four Leones (Le2, 008,122,444) was withdrawn from the Ola During Hospital Accounts, for purposes that were not actualized. So far, ACC investigations have established that One Hundred and Five Million, Six Hundred and Ninety-Five Thousand, Six Hundred and Seventy-Eight Leones (Le105, 695, 678, 00) of the monies withdrawn was spent without supporting documents. As part of the investigation processes, the ACC has spoken to various persons hitherto connected, and has forensically completed the examination of the Account, its inflows, and outflows. An investigation report has been completed for the attention of Prosecutions Department for legal advice.

a)The Audit Report alleged that officials of MAFS cannot account for withdrawals made from the Forestry’s Account, totaling Four Billion Leones (Le4B). Preliminary investigations have started. In this respect, the Commission has started analyzing relevant documents, and has accordingly obtained statement from the Permanent Secretary, and other key persons of interest. The investigation is currently in advanced stages.

b)In another development, the Audit Report also alleged that other staff members of the MAFS made several withdrawals amounting to Nine Hundred and Five Million Leones (Le905, 000, 000) from the Imprest Account without documents supporting the purpose(s) of such withdrawals, or the supporting documents on the expenditure of same.  The ACC analyzed the statements of the said Imprest Account, with respect to inflows and outflows. The investigation has reached advanced stage. The public would soon be updated on the outcome of this investigation.

The Special Technical Audit Report alleged that the following vendors/Aggregators, who sold, or are still selling EDSA credit, ORANGE, VENDTECH, SPLASH, AND IPAY, still owed the electricity company huge amounts. The investigations established that out of a cumulative sale of EDSA credit totaling Four Hundred and Thirty Five Million, Two Hundred and Thirty Five Thousand, Eight Hundred and Seventy One Leones (Le435, 235, 871.00), only paid back the sum of Three Hundred and Ninety One Million, Nine Hundred and Forty Two Thousand, Five Hundred and Twenty Nine Leones, Thirty Sixty Cents (Le391, 942,529. 36).  These Vendors should pay back a total balance of Forty Three Million, Two Hundred and Ninety Three Thousand, Three Hundred and Forty One Leones, Sixty Four Cents (Le43, 293, 341.64). Orange has settled the issue with EDSA and have no liability. However, the other three outlets have contested the calculations, claiming that they do not owe EDSA. Whilst the ACC investigations continue, COLOG, a South African-based EDSA service provider, has offered to provide an independent mediation and arbitration services with a view for an amicable resolution of the impasse. The ACC will Keep this issue in view.

The Commission shall continue collaborating with Audit Service Sierra Leone, the Sierra Leone Parliament and other accountability institutions to investigate, review and clarify issues raised in all concluded Audit Reports and to promptly update the public through media releases on interventions the ACC has made with regard the Auditor-General’s Audit Reports of Sierra Leone for all years. Meanwhile, the ACC wishes to reassure the general public of its determination and commitment to protecting public property and revenue at all times.

For further enquiries on this, please contact MORIS IBRAHIM KANTEH, the Assistant Public Relations Officer, on +232-78-832131 or via email info@anticorruption.gov.sl. 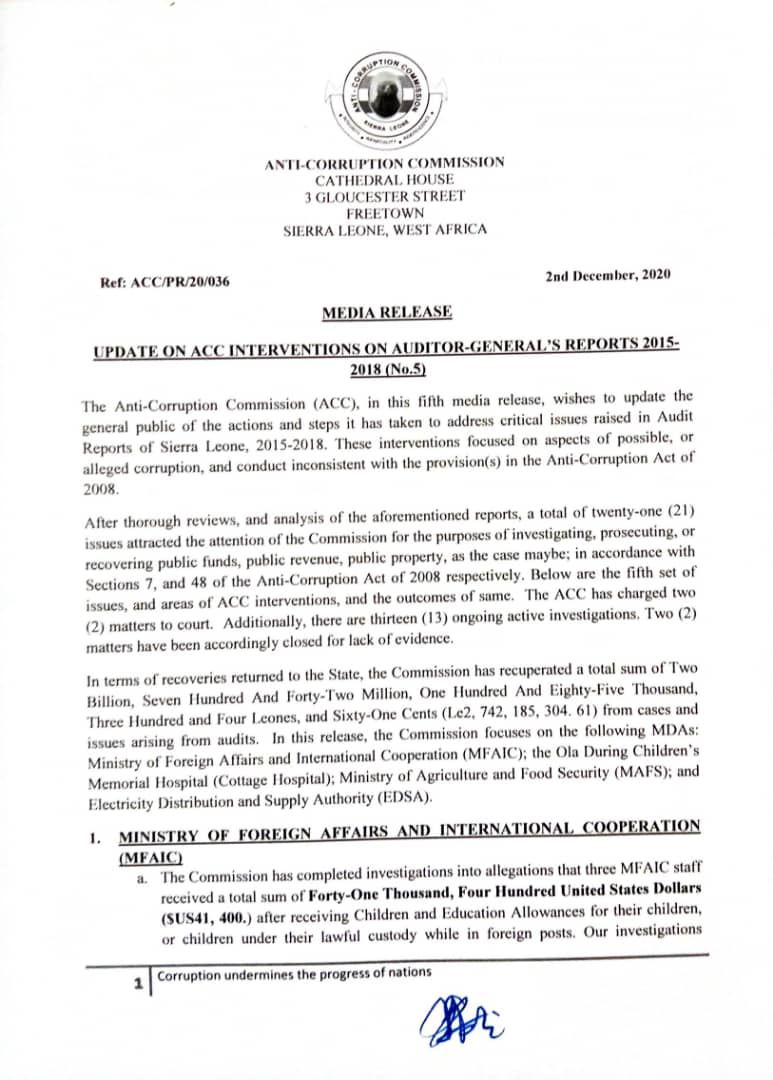 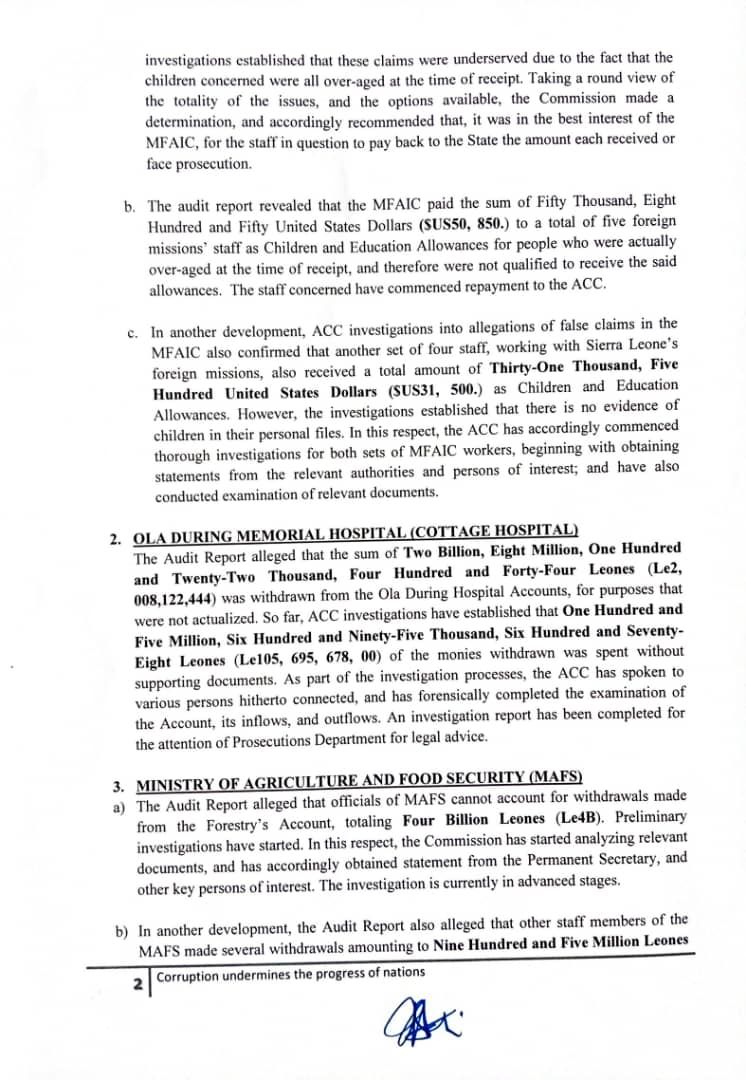 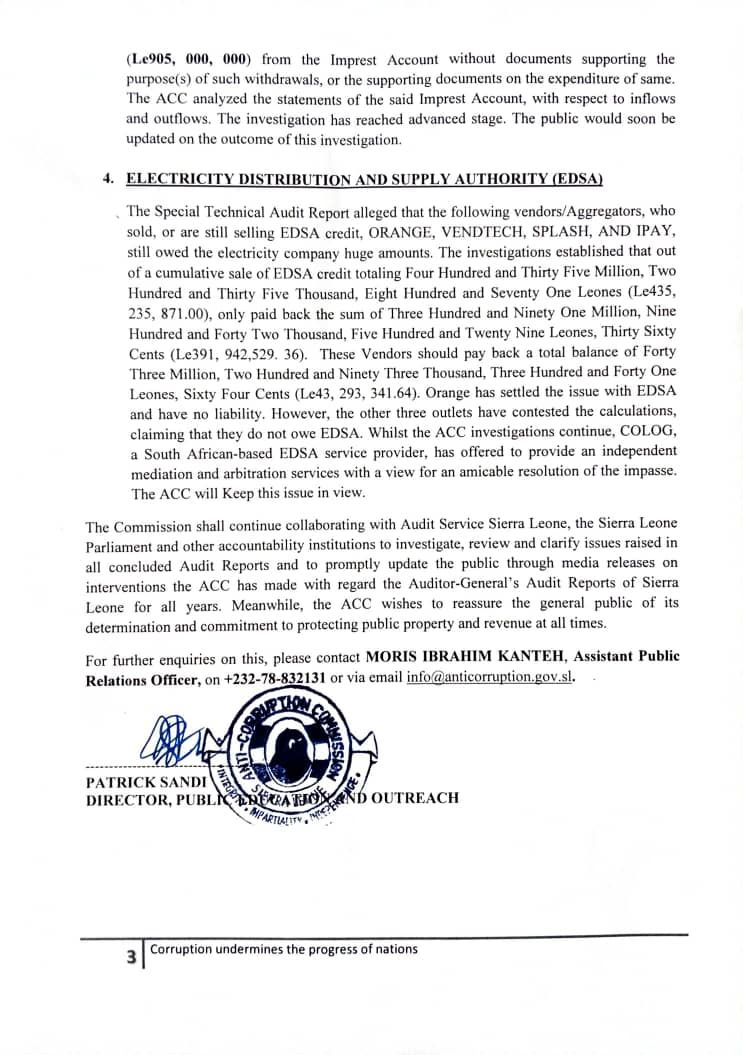