UPDATE ON ACC’s ACTIONS WITH AUDIT REPORTS (No.1)

The Anti-Corruption Commission (ACC) wishes to update the general public of the actions and steps it has taken to address critical issues raised in the Auditor General’s Audit Reports of Sierra Leone. These interventions focused on aspects of possible, or alleged corruption, and conduct inconsistent with provision(s) in the Anti-Corruption Act of 2008.

After a thorough review, and analysis of the aforementioned Report, a total of twenty-one (21) issues attracted the attention of the Commission; with a view to investigating, prosecuting, or recovering public funds, public revenue, public property, as the case maybe, in accordance with Sections 7, and 48 of the Anti-Corruption Act of 2008 respectively.

Below are some of the issues, and areas of ACC interventions, and the outcomes of same:

As of today’s date, the ACC has charged two (2) matters to Court.  Furthermore, there are thirteen (13) ongoing active investigations. Two (2) matters have been accordingly closed for lack of evidence. The Commission has recovered a total sum of Two Billion, Seven Hundred And Forty-Two Million, One Hundred And Eighty-Five Thousand, Three Hundred and Four Leones, Sixty-One Cents (Le: 2, 742, 185, 304, 61).

1. Electricity Distribution and Supply Authority (EDSA) -- The Audit Report alleged that EDSA made payments of more than One Billion, Four Hundred and Eighty Nine Million, One Hundred and Sixteen Thousand, Five Hundred and Thirty One Leones and Fifty Cents (Le: 1,489,116,531.50), to the Ministry of Energy and Power (MEP), without justification, or supporting documents.

ACC investigations established that the sum of One Billion, Seven Hundred And Fifty Seven Million Three Hundred And Sixty Four Thousand Two Hundred And Twenty Four Leones (Le: 1,757,364,224.00) was transferred by both EDSA, and Electricity Generation and Transmission Authority (EGTC), to the Ministry of Energy and Power (MEP), to settle the liabilities of the then National Power Authority (NPA), following the unbundling process. MEP submitted verifiable supporting documents. The matter was accordingly closed.

Nonetheless, ACC investigations unveiled that the sum of Sixty-Two Million (Le: 62, 000, 000) was dangling in the Ministry’s Account, claimed by no one. Accordingly, the ACC wrote to the Permanent Secretary of the said Ministry directing the transfer of same. The Ministry has implemented the recommendation of the Commission, withdrawn the money from the Account, and shared between EDSA and EGTC as per ACC recommendation.

2. EDSA- The Audit Report showed that EDSA made payments of Twenty Nine Billion, Nine Hundred and Two Million, Four Hundred and Fifty Nine Thousand, Six Hundred Thirty Fives Leones (Le: 29,902,459,635.00) to certain institutions without contractual agreement. Accordingly, ACC investigations established that the National Petroleum (NP) was overpaid in the sum of Four Billion, One Hundred and Two Million Leones (Le: 4,102,000,000) as the quantity supplied was less than what was paid. Since the Finance Departments of EDSA, and NP failed to take the necessary actions, the ACC has directed NP to pay back to the State the aforementioned amount into the EDSA Account. EDSA and NP are working on getting the recoveries done.

3. University of Sierra Leone (USL) – The Audit Report alleged that USL disbursed several loans and payments ranging from One Hundred Million (Le: 100.000.000), to Seven Billion (Le:7bn) Leones, to the various constituent Colleges without supporting documents. The ACC has obtained the required financial and other supporting documents. The said documents have been analyzed, and found to be consistent with the statements made by the officials of the University. There was therefore no loss.

4. National Social Security and Insurance Trust (NASSIT) -- The Technical Audit Report captured issues relating to alleged poor debt management, invalid pensioners, among others. ACC investigations established that the respective beneficiaries mentioned in the Technical Audit are genuine contributors, and beneficiaries to the NASSIT Scheme. They are therefore not ghost beneficiaries contrary to what was alleged.

5. Emergency Operation Centre (OEC) and National Ebola Response Centre (NERC) – The Audit Report captured alleged Mismanagement of Ebola Funds.  On this issue, the blanket “No Objection” issued by National Public Procurement Authority (NPPA) to both EOC and NERC, following the issuance of an Executive Clearance by State House undermined the procurement processes by apparently creating potential room for officials, and suppliers, to collude and steal from the provisions of goods, and services during the WAR against Ebola. However, the availability of the blanket “No Objection” from the NPPA to the NERC which made them not to be subject to established procurement rules and processes; and poor records keeping made it difficult to apportion responsibility.

The Commission shall continue to promptly update the public through media releases on interventions made in regard the Auditor General’s Audit Reports of Sierra Leone. Release No. 2 on Audit Reports will be out next week and subsequent weeks.

Meanwhile, the ACC wishes to reassure the general public of its resolve to protecting public property and revenue across the country at all times.

For further enquiries on this, please contact Margaret Murray, Public Relations Officer, on +232-78-832131 or via email info@anticorruption.gov.sl. 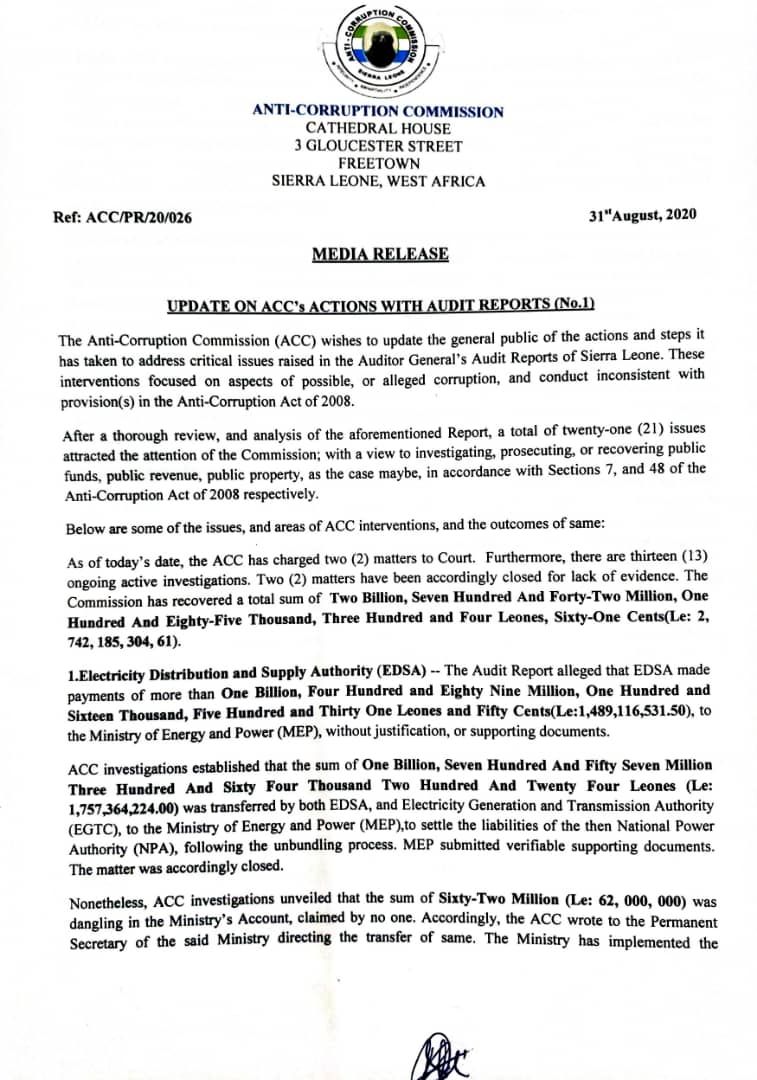 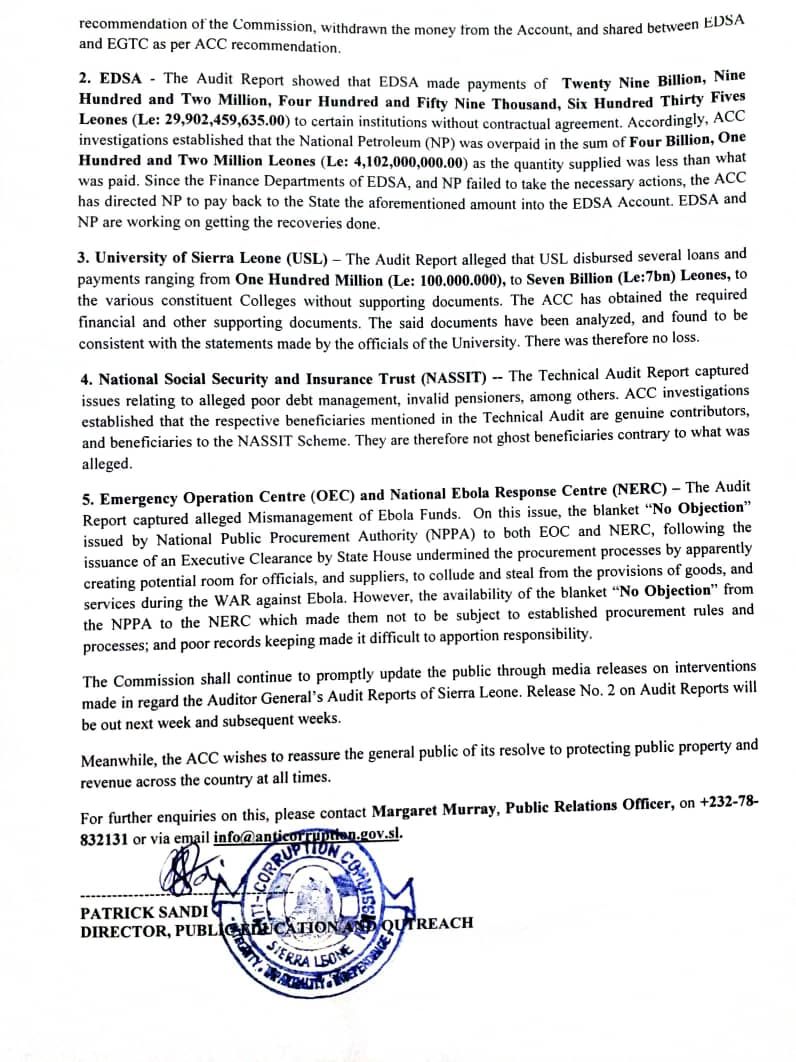