Following referral by the Independent Police Complaints Board (IPCB) based on a report by the Proprietor of Door to Door Enterprise (DDE) to them, on alleged procurement fraud by the Sierra Leone Police (SLP) management, the Anti-Corruption Commission (ACC) carried out investigations into the procurement of Accoutrements for the Sierra Leone Police from 2014 to 2017.

Furthermore, our investigations also confirmed that DDE was one of the most responsive bidders after the technical and financial evaluations, for which a letter of notification of award was written to DDE, but no contract was signed by SLP and DDE. However, the Police put on hold the actual contract due to the outbreak of the Ebola Viral Disease in 2014. This made them revert to the use of Request for Quotation (RFQ) procurement during that period to keep the Police procuring goods.

It further was established that sometime in 2017, DDE through the Request for Quotation (RFQ) procurement process supplied One Thousand Six Hundred (1,600) pairs of boots to the SLP instead of One Thousand Three Hundred (1,300) pairs, with an excess supply of Three Hundred (300) pairs of boots which were all distributed by the SLP Stores Department. It was also established that contrary to the claim by the Police, the unit cost for a pair of boots was Three Hundred and Fifty Thousand Leones (Le 350,000), and not Three Hundred Thousand Leones (Le300,000). The excess supplies, plus the deficit in the cost per unit was also concluded by the investigations to be One Hundred and Seventy Million Leones (Le 170M).

In conclusion, our findings confirmed that, the claims by DDE were largely true; albeit there were misunderstandings as to the reasons for the suspension of the DDE’s contract which was because of the outbreak of the Ebola. However, the Supplier (DDE) was not properly informed about the reason and he felt that the process was corrupt. It was finally concluded that the police owe him, on a purely contractual basis, the sum of One Hundred and Seventy Million Leones (Le 170M) for the supply of various accoutrements for the SLP which he is entitled to recover. Apart from that, the process was found to be corrupt free though a few systems and processes lapses need to be put in place by the police–in respect of which they have been accordingly advised. 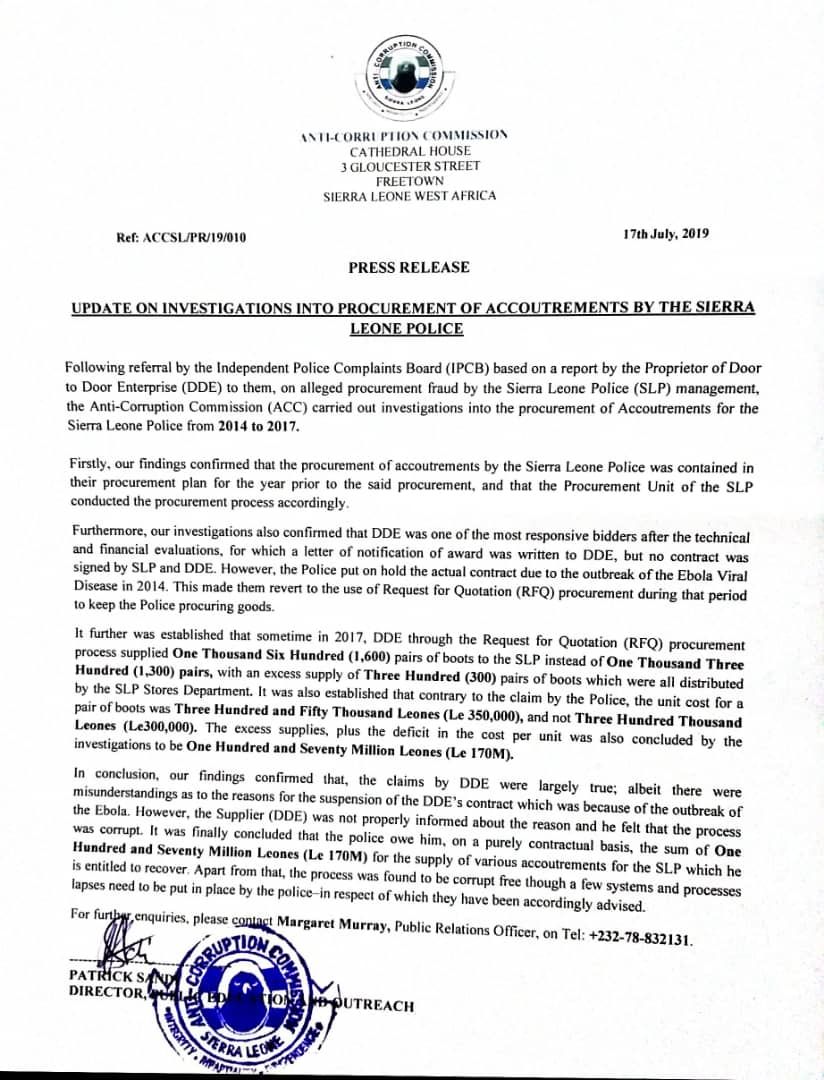